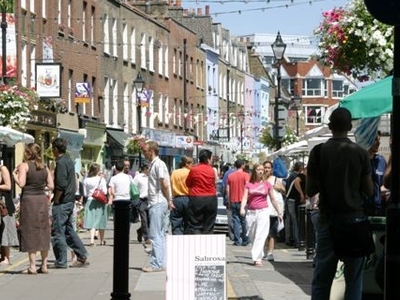 Exmouth Market is a semi pedestrianised street in Clerkenwell in the London Borough of Islington and the location of an outdoor street market of 32 stalls. Exmouth Market draws its name from the Exmouth Arms Pub that is centrally situated in the street. The area has been a market place since the 1890s and a number of the street's buildings date from the 19th century.

Street Market:
In autumn 2006 the Exmouth Market Trader's association decided to reinstate Exmouth Market's street market. It costs £35 a week to occupy land the size of a regular stall. Stallholders include local and well-known food companies and producers, as well as jewellery and gifts from East London designers.

The market was originally held every Friday (between 11-6) and Saturday (between 9-4) (as indicated on a banner), but hours have changed, and it now runs during weekdays only (including Thursday and Friday): food stalls run primarily 11-2.

Here's the our members favorite photos of "Famous Streets near London Borough of Islington". Upload your photo of Exmouth Market!

Going to Exmouth Market? Get answers from our friendly locals