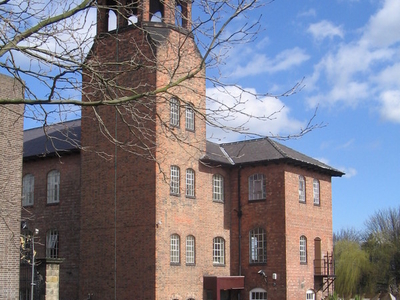 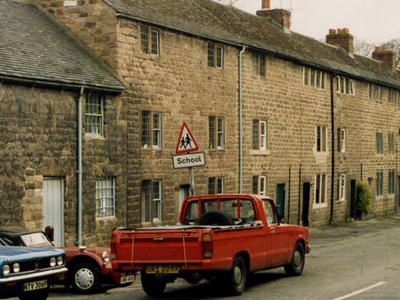 Derwent Valley Mills is a World Heritage Site along The River Derwent in Derbyshire, England, designated in December 2001. It is administered by the Derwent Valley Mills Partnership. The modern factory, or 'mill', system was born here in the 18th century to accommodate the new technology for spinning cotton developed by Richard Arkwright. With advancements in technology, it became possible to produce cotton continuously. The system was adopted throughout The Valley, and later spread so that by 1788 there were over 200 Arkwright-type mills in Britain. Arkwright's inventions and system of organising labour was exported to Europe and the United States.

Water-power was first introduced to England by John Lombe at his silk mill in Derby in 1719, but it was Richard Arkwright who applied water-power to the process of producing cotton in the 1770s. His patent of a water frame allowed cotton to be spun continuously and meant it could be produced by unskilled workers. Cromford Mill and Cromford was the site of Arkwright's first mill, and his system of production and worker's housing was copied throughout the valley.

To ensure the presence of a labour force, it was necessary to construct housing for the mill workers. Thus, new settlements were established by mill owners around the mills – sometimes developing a pre-existing community – with their own amenities such as schools, chapels, and markets. Most of the housing still exists and is still in use. Along with the transport infrastructure form part of the site. A transport infrastructure was built to open new markets for the mills' produce.

Location and Coverage
The Derwent Valley Mills World Heritage Site covers an area of 12.3 sq km (4.7 sq mi) and spans a 24 km (15 mi) stretch of the Derwent Valley, in Derbyshire, from Matlock Bath in the north to Derby city centre in the south. Within the site are mill complexes, settlements including workers' housing, weirs on the River Derwent, and the transport network that supported the mills in the valley.

The site consists of the communities of Cromford, Belper, Milford, and Darley Abbey, and includes 838 listed buildings, made up of 16 Grade I, 42 Grade II*, and 780 Grade II. A further nine structures are Scheduled Ancient Monuments. The buildings are a mixture of mills, workers' housing, and structures associated with the mill communities. The Cromford Canal and Cromford and High Peak Railway, which aided the industrialisation of the area, are also part of the World Heritage Site.

History
In the late 17th century silk making expanded due to demand for silk as part of fashionable garments. In an attempt to increase production through the use of water power, Thomas Cotchett commissioned engineer George Sorocold to build a mill near the centre of Derby on an island in the River Derwent. Although the experiment was unsuccessful, it convinced John Lombe – an employee of Cotchett – that if water power could be perfected there was a market for its produce. He engaged in industrial espionage and gained plans of Italian machines.

Legacy
The Derwent Valley is considered the birthplace of the factory system. The machines developed in the Derwent Valley such as the water frame allowed continuous production. Richard Arkwright's Cromford Mill and the associated workers' settlement provided a template for industrial communities, not just in the valley but internationally. The reason a settlement was built contemporaneously with Cromford Mill was to provide housing for the workers; the only way to secure the labour the mill required was if homes were provided for the labourers and their families.

The success of Arkwright's model lead to other industrialists copying him. Entrepreneurs such as Peter Nightingale, Jedediah Strutt and Thomas Evans founded the settlements of Belper, Milford, and Darley Abbey within the Derwent Valley for their employees. As well as the economic standpoint of ensuring a supply of labour, the industrialists were also concerned for their employees and families and acted out of a sense of paternalism.

Preservation
Out of the Arkwright Festival held in 1971, The Arkwright Society was formed. The Cromford Mill complex was bought by The Arkwright Society in 1979, saving the buildings associated with the mill from demolition. The charirty purchased the site for the purpose of conservation and with the intention of beginning restoration. The mills had been contaminated by industrial processes involving pigments and dyes which were stored in the mills after they stopped processing cotton. With the help of local councils, the East Midlands Development Agency, English Heritage, the Heritage Lottery Fund, and at the cost of £5 million, the mills were restored and decontaminated. Now Cromford Mill is now used by small businesses and used for education.

Here's the our members favorite photos of "Key Buildings in Manchester". Upload your photo of Derwent Valley Mills!

Going to Derwent Valley Mills? Get answers from our friendly locals

Get in touch with 5 Touristlink members who want to visit Derwent Valley Mills or with Holiday Zone and Lmbt who already have been here.