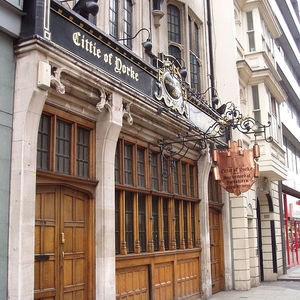 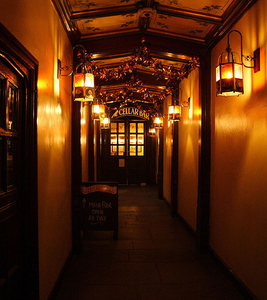 The Cittie of Yorke is a grade II listed public house on London's High Holborn, and is listed in CAMRA's national inventory of historic pub interiors. Although the current building is a rebuilding of the 1920s, the buildings on this site have been pubs since 1430. Some features include the Henekey's long bar located in the grand, hall-like back room, a late-Georgian or Regency era triangular metal stove, and Victorian-style cubicles.

The Welsh poet Dylan Thomas penned an impromptu ode to the pub when it was called Henneky's Long Bar. Fred Jarvis, a former general secretary of the National Union of Teachers, found the previously unknown poem in 2014 while going through papers belonging to his late parents-in-law who knew Thomas. The top of the poem reads "This little song was written in Henneky's Long Bar High Holborn by Dylan Thomas in 1951." Orion Publishing Group plans to include the song in a new edition of collected Thomas poems in October 2014.

Here's the our members favorite photos of "Pubs and Bars near London Borough of Camden". Upload your photo of Cittie of Yorke!

Going to Cittie of Yorke? Get answers from our friendly locals

Love pubs and bars? Check these out;

Pubs and Bars in London Borough of Camden

Pubs and Bars in London

Top Voted Pubs and Bars Around the World