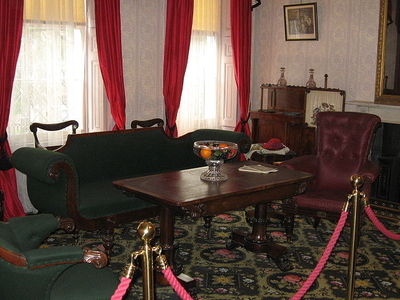 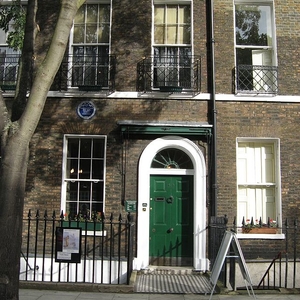 The Charles Dickens Museum is at 48 Doughty Street in Holborn, London Borough of Camden, England. It occupies a typical Georgian terraced house which was Charles Dickens' home from 25 March 1837 (a year after his marriage) to December 1839.

Dickens and Doughty Street:
Charles Dickens and his wife Catherine lived here with the eldest three of their ten children, with the older two of Dickens' daughters, Mary Dickens and Kate Macready Dickens being born in the house. A new addition to the household was Dickens' younger brother Frederick. Also, Catherine's 17 year old sister Mary moved with them from Furnival's Inn to offer support to her newly married sister and brother-in-law. It was not unusual for a woman's unwed sister to live with and help a newly married couple.

Dickens became very attached to Mary, and she died in his arms after a brief illness in 1837. She inspired characters in many of his books, and her death is fictionalized as the death of Little Nell. Dickens had a three year lease (at £80 a year) on the property. He would remain here until 1839 after which he moved on to grander homes as his wealth increased and his family grew. However, this is his only surviving London house. The two years that Dickens lived in the house were extremely productive, for here he completed The Pickwick Papers (1836), wrote the whole of Oliver Twist (1838) and Nicholas Nickleby (1838–39) and worked on Barnaby Rudge (1840–41).

The Museum:
The building at 48 Doughty Street was threatened with demolition in 1923, but was saved by the Dickens Fellowship, founded in 1902, who raised the mortgage and bought the property's freehold. The house was renovated and the Dickens House Museum was opened in 1925, under the direction of an independent trust, now a registered charity. The museum has since been renamed the Charles Dickens Museum.

Spread over four floors, the Charles Dickens Museum holds the World's most important collection of paintings, rare editions, manuscripts, original furniture and other items relating to the life and work of Dickens. Perhaps the best-known exhibit is the portrait of Dickens known as Dickens' Dream by R. W. Buss, an original illustrator of The Pickwick Papers. This unfinished portrait shows Dickens in his study at Gads Hill Place surrounded by many of the characters he had created.

Here's the our members favorite photos of "Museums near Bloomsbury". Upload your photo of Charles Dickens Museum!

Going to Charles Dickens Museum? Get answers from our friendly locals