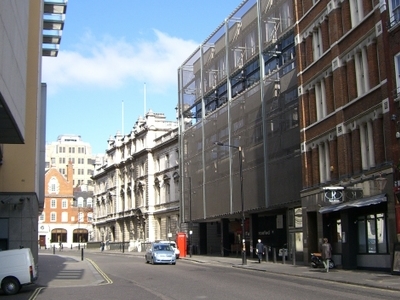 Bow Street is a thoroughfare in Covent Garden, Westminster, London. It features as one of the streets on the standard London Monopoly board. The area around Bow Street was developed by Francis Russell, 4th Earl of Bedford in the 1630s. Oliver Cromwell moved to Bow Street in 1645. Robert Harley, 1st Earl of Oxford was born there in 1661. No. 4 served as a magistrates' court from 1739 and the Bow Street Runners were founded there by Henry Fielding in the 1740s.

When the Metropolitan Police Service was established in 1829, a station house was sited at numbers 25 and 27. The former Bow Street Magistrates' Court and police station was completed in 1881 and closed in 2006. The building is to be converted into a boutique hotel. Bow Street is also the site of the Royal Opera House Covent Garden.

Here's the our members favorite photos of "Famous Streets near City of Westminster". Upload your photo of Bow Street!

Going to Bow Street? Get answers from our friendly locals