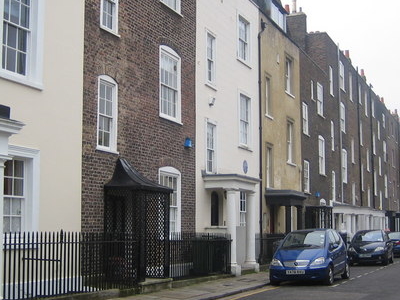 7 Hammersmith Terrace is a historic house in the London borough of Hammersmith and Fulham, England, and the former home of English engraver and printer Emery Walker. Walker was an important figure in the English Arts and Crafts movement, and a close friend of textile designer William Morris, who lived nearby. During his life, Walker furnished the home in an Arts and Crafts style, reflecting his friendships with Morris and others. After his death, his daughter Dorothy sought to preserve the interior of the house, while adding further items from the Morris family.

As a result of this preservation work, the house now offers a unique example of an Arts and Crafts interior, preserved almost as it was during the life of its former inhabitant. The property is currently under the ownership of the Emery Walker Trust, who describe it as "the last authentic Arts and Crafts interior in Britain". It is occasionally open to pre-booked public groups for tours. Hammersmith Terrace is located immediately off the A4 road, west of Hammersmith Broadway.

Present Day:
The Emery Walker Trust opened the house to the public for the first time in April 2005. Initially, there were fears that financial constraints would prevent future openings, but the house has been opened each summer since, to escorted groups and individuals by appointment. The house has a blue plaque to commemorate the life of its former resident.

Here's the our members favorite photos of "Historic Houses near Hammersmith and Fulham". Upload your photo of 7 Hammersmith Terrace!

Going to 7 Hammersmith Terrace? Get answers from our friendly locals

Historic Houses in Hammersmith and Fulham