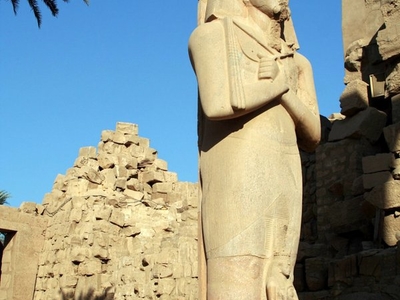 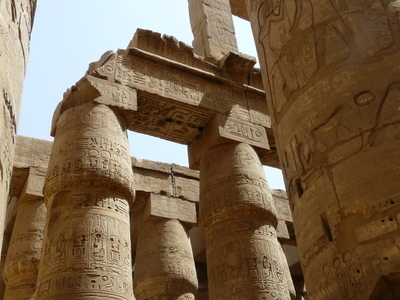 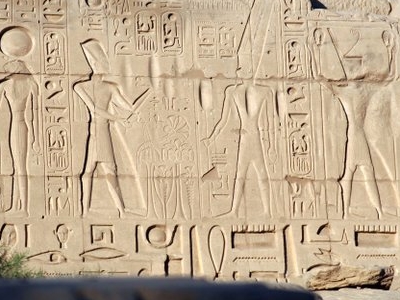 The Karnak Temple Complex—usually called Karnak (play /kɑːr.næk/)—comprises a vast mix of decayed temples, chapels, pylons, and other buildings. Building at the complex began in the reign of Sesostris I in the Middle Kingdom and continued into the Ptolemaic period, although most of the extant buildings date from the New Kingdom. The area around Karnak was the ancient Egyptian Ipet-isut ("The Most Selected of Places") and the main place of worship of the eighteenth dynasty Theban Triad with the god Amun as its head. It is part of the monumental city of Thebes. The Karnak complex takes its name from the nearby, and partly surrounded, modern village of el-Karnak, some 2.5 km north of Luxor.

Overview:
The complex is a vast open-air museum and the largest ancient religious site in the World. It is believed to be the second most visited historical site in Egypt, second only to the Giza Pyramids near Cairo. It consists of four main parts of which only the largest is currently open to the general public. The term Karnak often is understood as being the Precinct of Amun-Re only, because this is the only part most visitors normally see. The three other parts, the Precinct of Mut, the Precinct of Montu, and the dismantled Temple of Amenhotep IV, are closed to the public. There also are a few smaller temples and sanctuaries located outside the enclosing walls of the four main parts, as well as several avenues of goddesses and ram-headed sphinxes connecting the Precinct of Mut, the Precinct of Amun-Re, and the Luxor Temple.

The Precinct of Mut is very ancient, being dedicated to an Earth and creation deity, but not yet restored. The original temple was destroyed and partially restored by Hatsheput, although another pharaoh built around it in order to change the focus or orientation of the sacred area. Many portions of it may have been carried away for use in other buildings.

Main Parts:
Precinct of Amun-Re:
This is the largest of the precincts of the temple complex, and is dedicated to Amun-Re, the chief deity of the Theban Triad. There are several colossal statues including the figure of Pinedjem I which is 10.5 meters tall. The sandstone for this temple, including all the columns, was transported from Gebel Silsila 100 miles south on the Nile river.It also has one of the largest obelisks weighing 328 tonnes and standing 29 meters tall.

Precinct of Mut:
Located to the south of the newer Amen-Re complex, this precinct was dedicated to the mother goddess, Mut, who became identified as the wife of Amun-Re in the eighteenth dynasty Theban Triad. It has several smaller temples associated with it and has its own sacred lake, constructed in a crescent shape. This temple has been ravaged, many portions having been used in other structures. It is not open to the public. Six hundred black granite statues were found in the courtyard to her temple. It may be the oldest portion of the site.

Here's the our members favorite photos of "Religious in Luxor City". Upload your photo of Karnak!

Going to Karnak? Get answers from our friendly locals

Get in touch with 16 Touristlink members who want to visit Karnak or with Moon Travel, Ahmed Helal and 23 others who already have been here.