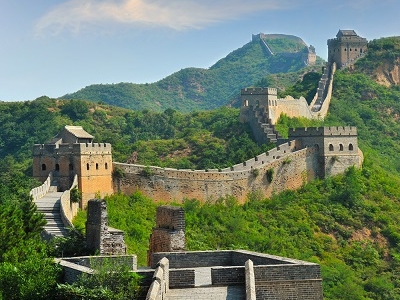 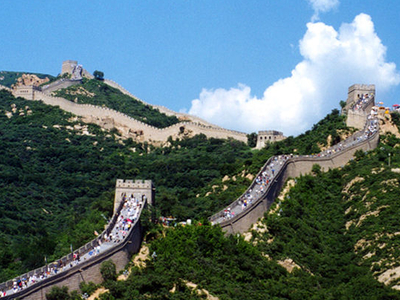 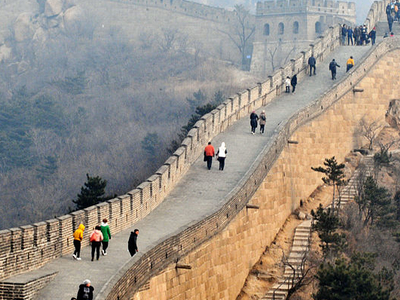 More Photos >
Save me
Been here
Want to go
Show on Map
Here to help 89 tour guides, 21 locals and 2 ambassadors

The Great Wall of China is a series of fortifications made of stone, brick, tamped earth, wood, and other materials, generally built along an east-to-west line across the historical northern borders of China to protect the Chinese states and empires against the raids and invasions of the various nomadic groups of the Eurasian Steppe. Several walls were being built as early as the 7th century BCE; these, later joined together and made bigger and stronger, are now collectively referred to as the Great Wall. Especially famous is the wall built 220–206 BCE by Qin Shi Huang, the first Emperor of China. Little of that wall remains. Since then, the Great Wall has on and off been rebuilt, maintained, and enhanced; the majority of the existing wall is from the Ming Dynasty.

Other purposes of the Great Wall have included border controls, allowing the imposition of duties on goods transported along the Silk Road, regulation or encouragement of trade and the control of immigration and emigration. Furthermore, the defensive characteristics of the Great Wall were enhanced by the construction of watch towers, troop barracks, garrison stations, signaling capabilities through the means of smoke or fire, and the fact that the path of the Great Wall also served as a transportation corridor.

The Great Wall stretches from Dandong in the east, to Lop Lake in the west, along an arc that roughly delineates the southern edge of Inner Mongolia. A comprehensive archaeological survey, using advanced technologies, has concluded that the Ming walls measure 8,850 km (5,500 mi). This is made up of 6,259 km (3,889 mi) sections of actual wall, 359 km (223 mi) of trenches and 2,232 km (1,387 mi) of natural defensive barriers such as hills and rivers. Another archaeological survey found that the entire wall with all of its branches measure out to be 21,196 km (13,171 mi).

Characteristics:
Before the use of bricks, the Great Wall was mainly built from rammed earth, stones, and wood. During the Ming, however, bricks were heavily used in many areas of the wall, as were materials such as tiles, lime, and stone. The size and weight of the bricks made them easier to work with than earth and stone, so construction quickened. Additionally, bricks could bear more weight and endure better than rammed earth. Stone can hold under its own weight better than brick, but is more difficult to use. Consequently, stones cut in rectangular shapes were used for the foundation, inner and outer brims, and gateways of the wall. Battlements line the uppermost portion of the vast majority of the wall, with defensive gaps a little over 30 cm (12 in) tall, and about 23 cm (9.1 in) wide. From the parapets, guards could survey the surrounding land. Communication between the army units along the length of the Great Wall, including the ability to call reinforcements and warn garrisons of enemy movements, was of high importance. Signal towers were built upon hill tops or other high points along the wall for their visibility. Wooden gates could be used as a trap against those going through. Barracks, stables, and armories were built near the wall's inner surface.

Visibility from the Moon:
One of the earliest known references to this myth appears in a letter written in 1754 by the English antiquary William Stukeley. Stukeley wrote that, "This mighty wall of four score miles in length (Hadrian's Wall) is only exceeded by the Chinese Wall, which makes a considerable figure upon the terrestrial globe, and may be discerned at the Moon." The claim was also mentioned by Henry Norman in 1895 where he states "besides its age it enjoys the reputation of being the only work of human hands on the globe visible from the Moon." The issue of "canals" on Mars was prominent in the late 19th century and may have led to the belief that long, thin objects were visible from space. The claim that the Great Wall is visible also appears in 1932's Ripley's Believe It or Not! strip and in Richard Halliburton's 1938 book Second Book of Marvels.

The claim the Great Wall is visible from space has been debunked many times, but is still ingrained in popular culture. The wall is a maximum 9.1 m (30 ft) wide, and is about the same color as the soil surrounding it. Based on the optics of resolving power (distance versus the width of the iris: a few millimeters for the human eye, meters for large telescopes) only an object of reasonable contrast to its surroundings which is 70 mi (110 km) or more in diameter (1 arc-minute) would be visible to the unaided eye from the Moon, whose average distance from Earth is 384,393 km (238,851 mi). The apparent width of the Great Wall from the Moon is the same as that of a human hair viewed from 3.2 kilometers (2 mi) away. To see the wall from the Moon would require spatial resolution 17,000 times better than normal (20/20) vision. Unsurprisingly, no lunar astronaut has ever claimed to have seen the Great Wall from the Moon.

Visibility from Low Earth Orbit:
A more controversial question is whether the Wall is visible from low Earth orbit (an altitude of as little as 160 kilometers (100 mi)). NASA claims that it is barely visible, and only under nearly perfect conditions; it is no more conspicuous than many other man-made objects. Other authors have argued that due to limitations of the optics of the eye and the spacing of photoreceptors on the retina, it is impossible to see the wall with the naked eye, even from low orbit, and would require visual acuity of 20/3 (7.7 times better than normal).

Astronaut William Pogue thought he had seen it from Skylab but discovered he was actually looking at the Grand Canal of China near Beijing. He spotted the Great Wall with binoculars, but said that "it wasn't visible to the unaided eye." U.S. Senator Jake Garn claimed to be able to see the Great Wall with the naked eye from a space shuttle orbit in the early 1980s, but his claim has been disputed by several U.S. astronauts. Veteran U.S. astronaut Gene Cernan has stated: "At Earth orbit of 100 to 200 miles (160 to 320 km) high, the Great Wall of China is, indeed, visible to the naked eye." Ed Lu, Expedition 7 Science Officer aboard the International Space Station, adds that, "it's less visible than a lot of other objects. And you have to know where to look."

Here's the our members favorite photos of "Ancient Walls near Changping". Upload your photo of Great Wall Of China!

Going to Great Wall Of China? Get answers from our friendly locals

Get in touch with 71 Touristlink members who want to visit Great Wall Of China or with Tinny Panyafu, Anigho Homi and 53 others who already have been here.

Love ancient walls? Check these out;