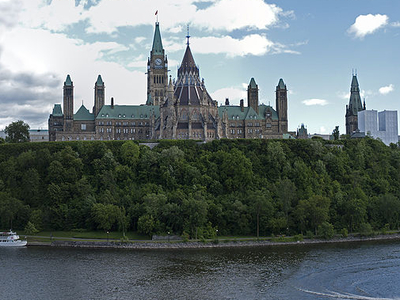 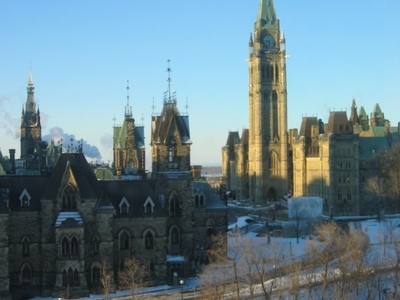 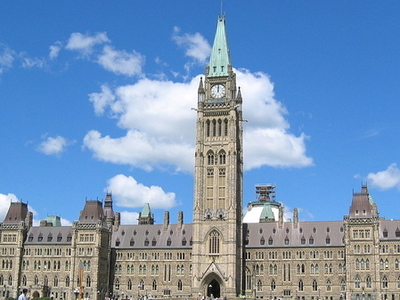 Parliament Hill colloquially known as The Hill, is an area of Crown land on the southern banks of the Ottawa River in downtown Ottawa, Ontario. Its Gothic revival suite of buildings Originally the site of a military base in the 18th and early 19th centuries, development of the site into a governmental precinct began in 1859, after Bytown was chosen by Queen Victoria as the capital of the Province of Canada. Following a number of extensions to the parliament and departmental buildings and a fire in 1916 that destroyed the Centre Block, Parliament Hill took on its present form with the completion of the Peace Tower in 1927.

Since 2002, an extensive $1 billion renovation and rehabilitation project has been underway throughout all of the precinct's buildings; work is not expected to be complete until after 2020. Parliament Hill is a limestone outcrop with a gently sloping top that was originally covered in primeval forest of beech and hemlock. For hundreds of years, the hill served as a landmark on the Ottawa River for First Nations and, later, European traders, adventurers, and industrialists, to mark their journey to the interior of the continent. After Ottawa In 1858, Queen Victoria selected Bytown as the capital of the Province of Canada, and Barrack Hill was chosen as the site for the new parliament buildings, given its prominence over both the town and the river, as well as the fact that it was already owned by the Crown. On 7 May, a call was put out by the Department of Public Works for design proposals for the new parliament buildings to be erected on Barrack Hill, which was answered with 298 submitted drawings. After the entries were narrowed down to three, Governor General Sir Edmund Walker Head was approached to break the stalemate, and the winners were announced on 29 August 1859.

Here's the our members favorite photos of "Parliaments in Ottawa". Upload your photo of Parliament Hill!

Going to Parliament Hill? Get answers from our friendly locals

Get in touch with 1 Touristlink members who want to visit Parliament Hill or with Taylor Polischuk and Kathya Chacon who already have been here.

Love parliaments? Check these out;

Top Voted Parliaments Around the World