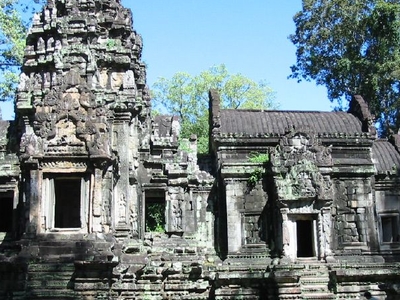 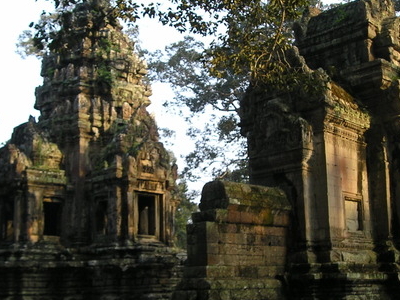 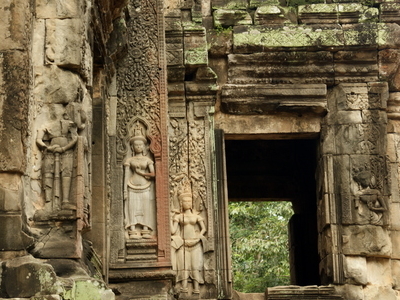 Thommanon (Khmer: ប្រាសាទធម្មនន្ទ) is one of a pair of Hindu temples built during the reign of Suryavarman II (from 1113–1150) at Angkor, Cambodia. This small and elegant temple is located east of the Gate of Victory of Angkor Thom and north of Chau Say Tevoda. It is part of the UNESCO World Heritage Site, inscribed by UNESCO in 1992 titled Angkor. The temple is dedicated to Shiva and Vishnu.

Scholars studying the carvings of the devatas in Thommanon have concluded that Thommanon was built around the time when work on Angkor Wat was begun. However, there is some disagreement as to the precise date it was built. Some believe that the distinctive carvings of females, known as devatas indicate that they were built during the reign of Jayavarman VI (1080–1113 AD), some time at the end of the 11th century.

However, there is greater agreement, especially given the scholarly studies that it was built by Suryavarman II around the time of Angkor Wat and Beng Mealea from 1,113–1,150 AD. The Vaishnavite cult was adopted in Cambodia by Jayavarman II and his son Jayavarman III. Under these two rulers, the shaivite cult was subsumed with the Vaishnavite cult in the temples such as the Thommaman, Beng, Melea, Chausey, Tevoda, Bantay Samre, and Angkor Vat.

Thommanon is located directly opposite the Chau Say Tevoda and just 500 metres east of the Victory Gate on the way to Ta Keo. In the 1960s, the temple underwent a full restoration, funded by the École française d'Extrême-Orient (EFEO). French archaeologists restored it and added concrete ceilings.

Here's the our members favorite photos of "Temples in Siem Reap". Upload your photo of Thommanon!

Going to Thommanon? Get answers from our friendly locals