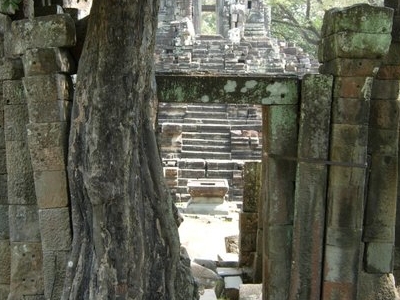 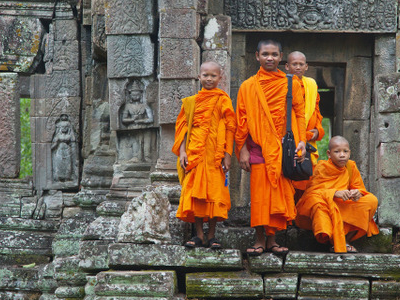 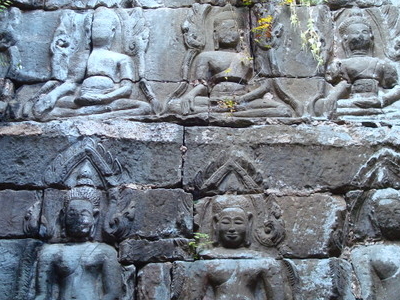 Preah Pithu (Khmer: ប្រាសាទព្រះពិធូរ), or Prah Pithu, is a group of five temples at Angkor, Cambodia. The temples are located in Angkor Thom, north-east of the Bayon, in front of Tep Pranam. The temples are near but they weren't built in the same period, except for two of them, so there is no apparent order. They're identified by letters: T, U, V, W and X. "X" is a Buddhist temple, it remained unfinished and is probably the latest. The others are Hindu. The five temples are in bad conditions, upper levels are ruined, but their carvings are interesting and the site is rather peaceful, wooded and scarcely crowded. A moat, often dry, surrounds some of the temples. They were cleaned first by Jean Commaille in 1908, then by Henri Marchal from 1918 to 1920.

They were built together quite for sure, as they are on the same W-E axis and are surrounded by a single moat. They're oriented to the west, having a cruciform terrace on two levels with nāgas balaustrades as entrance. The temple "T" has a sandstone enclosure, which measures 45 by 40 meters, and has two gopuras on the main W-E axis. The sanctuary, on a 3-levels ornated platform 6 meters high, has a chamber which sheltered a large linga on its pedestal.

The fragments of the lintel of western door, on the ground, show a stylized depiction of the "Churning of the Sea of Milk", while the walls are decorated with devatas and floral motifs, Bayon style. The temple "U" is similar to "T", but smaller and simpler. Its enclosure is 35 by 28 meters. It has no gopura. The lintel of west door shows the Trimurti, with Shiva dancing on a kala-head between Vishnu and Brahma. The internal walls are sculpted with dvarapalas and the blind arches at the base of pillars are typical of Angkor Wat period. On the northern lintel there is another depiction of the "Churning of the Sea of Milk".

Temple "X" stands on a large terrace, 4 meters high, about 100 meters east of temple "U". It is straight reachable from there if the moat is dry. It is similar in design to the former temples but is larger and incomplete in its decorations. "X" is a buddhist temple: on the walls of the sanctuary chamber there is a double row of sculpted Buddhas. Even the lintels show buddhist motifs. However the most interesting remains, depicting famous Siddharta's cutting of the hair, are not in place. Towards the east, the laterite terrace is surrounded by semas, delimiting the sacred area.

Here's the our members favorite photos of "Temples in Siem Reap". Upload your photo of Preah Pithu!

Going to Preah Pithu? Get answers from our friendly locals