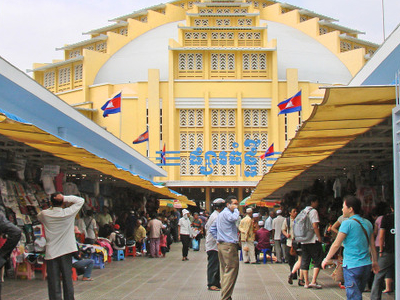 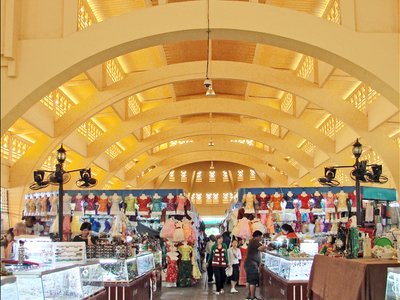 The Central Market (Khmer: ផ្សារធំថ្មី, "Psah Thom Thmey", "New Grand Market"), is a large market constructed in 1937 in the shape of a dome with four arms branching out into vast hallways with countless stalls of goods. Initial design and layouts are from French architect Louis Chauchon. Construction works were supervised by French architects Jean Desbois and Wladimir Kandaouroff.

It is located in Cambodia's capital city, Phnom Penh. When it first opened in 1937, it was said to be the biggest market in Asia; today it still operates as a market. From 2009 to 2011, it underwent a US$4.2 million renovation funded by the French Development Agency. The market opens from 7:00 AM to 5:00 PM. It is, for tourists, a 'must see' stop. Most tourists visit this market because they want to see the extensive amount of products that are offered for bargain. The four wings of this gigantic yellow dome are teeming with stalls that sell goods ranging from gold and silver, antique coins, money exchange, men's and women's apparel, clocks, books, flowers, food, fabrics, shoes, souvenirs, fish, seafood, dessert, luggage, and countless other products.

The unique Art Deco building is a Phnom Penh landmark. Before 1935, the area was a lake that received runoff during the rainy season. The lake was drained and construction began in 1935. Since its completion in 1937, wet season flooding around the market has remained a problem and is vestigial evidence of the old lake. The entrance to the market is lined with souvenir merchants hawking everything from T-shirts and postca

rds to silver curios and kramas. Inside is a dazzling display of jewels and gold. Electronic goods, stationery, secondhand clothes and flowers are also sold. During the Franco-Thai war the market was bombed heavily by Thai aircraft, causing heavy damage, and it had to be temporarily closed. After the end of World War II the market was rebuilt in the modern style.

Here's the our members favorite photos of "Markets in Phnom Penh". Upload your photo of Central Market!

Going to Central Market? Get answers from our friendly locals