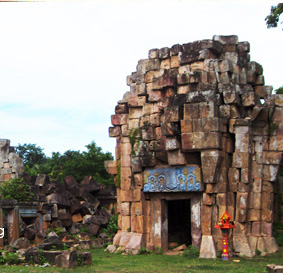 Baset Temple is picturesquely situated on top of a hill in Baset village which was built during the rule of King Suryavarman II. The town of Battambang is located at a distance of 15 kilometers from this temple. The Baset Temple earnestly reflects an adaptation of the 11th century architectural practices in Cambodia. Said to have been built between 1036 and 1042, this temple is adjacent to a pond which is 65 feet long, 39 feet wide and 33 feet deep. The Baset Temple pond remains filled with water throughout the year and do not dry up even in the summer season. However, remarkably the water level also remains normal during the rainy season.

Here's the our members favorite photos of "Temples in Battambang". Upload your photo of Baset Temple!

Going to Baset Temple? Get answers from our friendly locals

Get in touch with 1 Touristlink members who want to visit Baset Temple or with True Travel, Nguyễn Long and 4 others who already have been here.