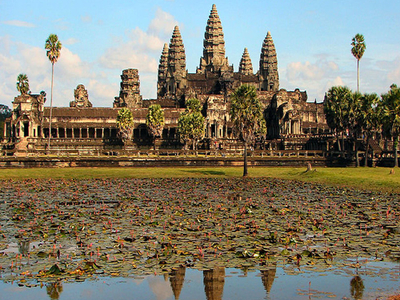 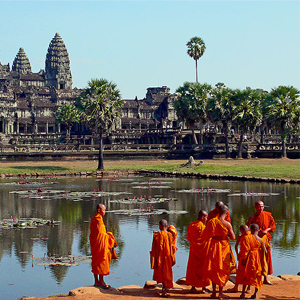 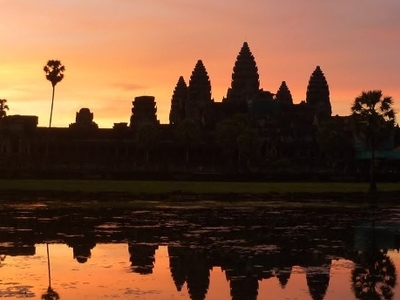 More Photos >
Save me
Been here
Want to go
Show on Map
Here to help 395 tour guides, 425 locals and 4 ambassadors

Angkor Wat (Khmer: អង្គរវត្ត or "Capital Temple") is a temple complex in Cambodia and the largest religious monument in the World. It was originally founded as a Hindu temple for the Khmer Empire, gradually transforming into a Buddhist temple toward the end of the 12th century. It was built by the Khmer King Suryavarman II in the early 12th century in Yaśodharapura (Khmer: យសោធរបុរៈ, present-day Angkor), the capital of the Khmer Empire, as his state temple and eventual mausoleum. Breaking from the Shaiva tradition of previous kings, Angkor Wat was instead dedicated to Vishnu. As the best-preserved temple at the site, it is the only one to have remained a significant religious center since its foundation. The temple is at the top of the high classical style of Khmer architecture. It has become a symbol of Cambodia, appearing on its national flag, and it is the country's prime attraction for visitors.

Angkor Wat combines two basic plans of Khmer temple architecture: the temple-mountain and the later galleried temple. It is designed to represent Mount Meru, home of the devas in Hindu mythology: within a moat and an outer wall 3.6 kilometres (2.2 mi) long are three rectangular galleries, each raised above the next. At the centre of the temple stands a quincunx of towers. Unlike most Angkorian temples, Angkor Wat is oriented to the west; scholars are divided as to the significance of this. The temple is admired for the grandeur and harmony of the architecture, its extensive bas-reliefs, and for the numerous devatas adorning its walls.

The modern name, Angkor Wat, means "Temple City" or "City of Temples" in Khmer; Angkor, meaning "city" or "capital city", is a vernacular form of the word nokor (នគរ), which comes from the Sanskrit word nagara (नगर). Wat is the Khmer word for "temple grounds" (Sanskrit: वाट vāṭa ""enclosure").

History:
Angkor Wat lies 5.5 kilometres (3.4 mi) north of the modern town of Siem Reap, and a short distance south and slightly east of the previous capital, which was centred at Baphuon. It is in an area of Cambodia where there is an important group of ancient structures. It is the southernmost of Angkor's main sites.

According to one legend, the construction of Angkor Wat was ordered by Indra to act as a palace for his son Precha Ket Mealea. According to the 13th century Chinese traveler Daguan Zhou, it was believed by some that the temple was constructed in a single night by a divine architect.

Site and Plan:
Angkor Wat is a unique combination of the temple mountain, the standard design for the empire's state temples and the later plan of concentric galleries. The temple is a representation of Mount Meru, the home of the gods: the central quincunx of towers symbolises the five peaks of the mountain, and the walls and moat the surrounding mountain ranges and ocean. Access to the upper areas of the temple was progressively more exclusive, with the laity being admitted only to the lowest level.

Outer Enclosure:
The outer wall, 1024 by 802 m and 4.5 m high, is surrounded by a 30 m apron of open ground and a moat 190 m wide. Access to the temple is by an earth bank to the east and a sandstone causeway to the west; the latter, the main entrance, is a later addition, possibly replacing a wooden bridge. There are gopuras at each of the cardinal points; the western is by far the largest and has three ruined towers. Glaize notes that this gopura both hides and echoes the form of the temple proper. Under the southern tower is a statue of Vishnu, known as Ta Reach, which may originally have occupied the temple's central shrine.

Tourism:
Since the 1990s, Angkor Wat has become a major tourist destination. In 1993, there were only 7,650 visitors to the site; by 2004, government figures show that 561,000 foreign visitors had arrived in Siem Reap province that year, approximately 50% of all foreign tourists in Cambodia. The number reached over a million in 2007, and over two million by 2012. Most visited Angkor Wat, which received over two million foreign tourists in 2013. The site has been managed by the private SOKIMEX group since 1990, which rented it from the Cambodian government. The influx of tourists has so far caused relatively little damage, other than some graffiti; ropes and wooden steps have been introduced to protect the bas-reliefs and floors, respectively. Tourism has also provided some additional funds for maintenance—as of 2000 approximately 28% of ticket revenues across the whole Angkor site was spent on the temples—although most work is carried out by foreign government-sponsored teams rather than by the Cambodian authorities.

Since Angkor Wat has seen significant growth in tourism throughout the years UNESCO and its International Co-ordinating Committee for the Safeguarding and Development of the Historic Site of Angkor (ICC), in association with representatives from the Royal Government and APSARA, organized seminars to discuss the concept of "cultural tourism". Wanting to avoid commercial and mass tourism, the seminars emphasized the importance of providing high quality accommodation and services in order for the Cambodian government to benefit economically, while also incorporating the richness of Cambodian culture. In 2001, this incentive resulted in the concept of the "Angkor Tourist City" which would be developed with regard to traditional Khmer architecture, contain leisure and tourist facilities, and provide luxurious hotels capable of accommodating large amounts of tourists.

The prospect of developing such large tourist accommodations has encountered concerns from both APSARA and the ICC, claiming that previous tourism developments in the area have neglected construction regulations and more of these projects have the potential to damage landscape features. Also, the large scale of these projects have begun to threaten the quality of the nearby town's water, sewage, and electricity systems. It has been noted that such high frequency of tourism and growing demand for quality accommodations in the area, such as the development of a large highway, has had a direct effect on the underground water table, subsequently straining the structural stability of the temples at Angkor Wat. Locals of Siem Reap have also voiced concern that the charm and atmosphere of their town have been compromised in order to entertain tourism. Since this local atmosphere is the key component to projects like Angkor Tourist City, local officials continue to discuss how to successfully incorporate future tourism without sacrificing local values and culture.

At the ASEAN Tourism Forum 2012, it was agreed that Borobudur and Angkor Wat would become sister sites and the provinces sister provinces.

Here's the our members favorite photos of "Temples in Angkor". Upload your photo of Angkor Wat!

Going to Angkor Wat? Get answers from our friendly locals

Get in touch with 68 Touristlink members who want to visit Angkor Wat or with Aamir Jamal, Deepak Nashine and 105 others who already have been here.