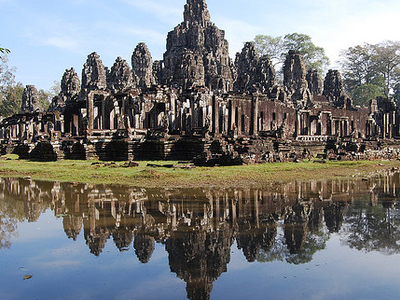 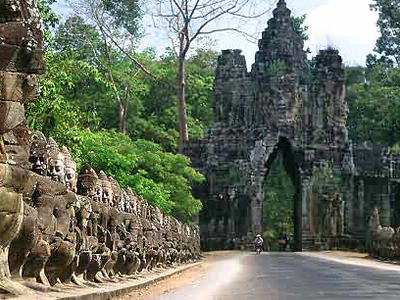 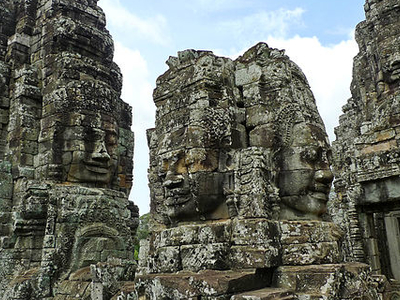 Angkor Thom (Khmer: អង្គរធំ; literally: "Great City"), located in present day Cambodia, was the last and most enduring capital city of the Khmer empire. It was established in the late twelfth century by King Jayavarman VII. It covers an area of 9 km², within which are located several monuments from earlier eras as well as those established by Jayavarman and his successors.

At the centre of the city is Jayavarman's state temple, the Bayon, with the other major sites clustered around the Victory Square immediately to the north. Angkor Thom was established as the capital of Jayavarman VII's empire, and was the centre of his massive building programme. One inscription found in the city refers to Jayavarman as the groom and the city as his bride.

Style
Angkor Thom is in the Bayon style. This manifests itself in the large scale of the construction, in the widespread use of laterite, in the face-towers at each of the entrances to the city and in the naga-carrying giant figures which accompany each of the towers.

The site
The city lies on the West Bank of the Siem Reap River, a tributary of Tonle Sap, about a quarter of a mile from the river. The south gate of Angkor Thom is 7.2 km north of Siem Reap, and 1.7 km north of the entrance to Angkor Wat. The walls, 8 m high and flanked by a moat, are each 3 km long, enclosing an area of 9 km². The walls are of laterite buttressed by earth, with a parapet on the top.

There are gates at each of the cardinal points, from which roads lead to the Bayon at the centre of the city. As the Bayon itself has no wall or moat of its own, those of the city are interpreted by archaeologists as representing the mountains and oceans surrounding the Bayon's Mount Meru. Another gate—the Victory Gate—is 500 m north of the east gate; the Victory Way runs parallel to the east road to the Victory Square and the Royal Palace north of the Bayon.

Angkor Thom in popular culture
Lara Croft: Tomb Raider features several characters visiting Angkor Thom during their trip to Cambodia to recover the first piece of the Triangle of Light. In James Rollins' SIGMA Force Book 4: The Judas Strain (2007), the characters' journey to find a cure for a plague, which requires following in the steps of Marco Polo, leads them to the Angor Thom.

Here's the our members favorite photos of "Ruins in Siem Reap". Upload your photo of Angkor Thom!

Going to Angkor Thom? Get answers from our friendly locals

Get in touch with 2 Touristlink members who want to visit Angkor Thom or with Sin Sysokha, Rachelle Lee and 18 others who already have been here.