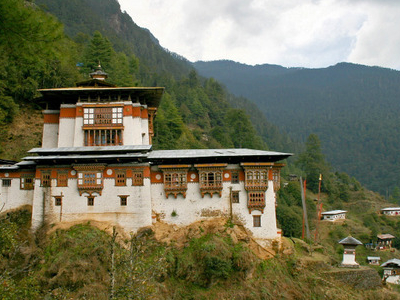 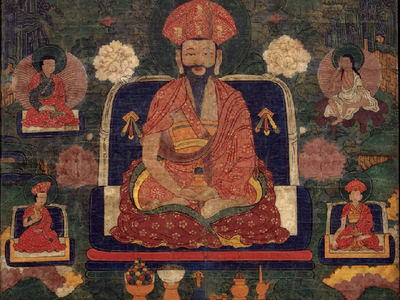 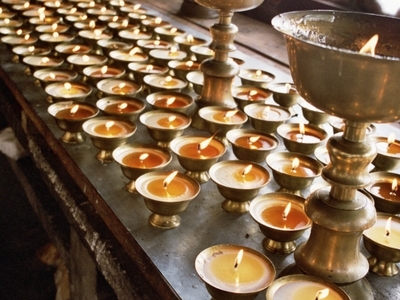 The Tango Monastery is a Buddhist monastery located 14 kilometres (8.7 mi) to the north of the capital city of Thimphu in Bhutan, near Cheri Mountain. It was founded by Lama Gyalwa Lhanampa in the 13th century and built in its present form by Tenzin Rabgye, the 4th Temporal Ruler in 1688. In 1616, the Tibetan, Shabdrung Ngawang Namgyal, meditated in its cave. The self-emanated form of the wrathful Hayagriva is deified in the monastery. It belongs to the Drukpa Kagyu School of Buddhism in Bhutan.

The word 'Tango' in Bhutanese language means “horse head”. This name conforms to the main deity Hayagriva (local name Tandin) deified in the monastery. According to local legend, the location of this monastery is the holy place where Avalokiteshvara revealed himself as "the self-emanated form of the Wrathful Hayagriva". The location had been prophesised in Tibet. The acclamation of the divine nature of this place by Ngawang Tenzin is

In the spacious southern valley, this horse-head is like a chaitya (chorten) come down from the 33rd heaven. It was emanated like a wish-fulfilling gem from the palaces of the Nagas underneath the earth. It stands on this earth like a tutelary deity. The triangular mandala below the horse-head signifies that it will be a place conducive to meditative accomplishments. The majestic height and space behind the horse-head indicates the greatness and glory of the Kargyupa sect. In front, it has the appearance of a heaping of precious jewels, symbolising the best utilization of endless hidden treasures.

The sacred unvarying Vajrasana falls at its right, pointing to the immortality of morally up-right people. At its left is the oblation of the river like the Ganges, possessed of eight attributes, reflecting the satisfaction of all noble sons of the land in the Dharma. At its centre, the unshakeable Vajrasana represents the everlastingness of the Dharmakaya. Below is the dzong of Kiphug nyima, a symbol of the increase of samadhi. Above is the super-natural horse in space, embodying the subjugation of the 3 sensual worlds. The rugged and steep hill to its right signifies the subjugation of heroes. At the left, Maheshvara is shown to be within the power of Hayagriva, signifies the subjugation of heroines.

At the centre, the sacred secluded spot of dakini indicates the purity and protection of the Dharma. The Silwatshel (cool grove) temple of Mahakala below symbolizes the subjugation of all the Dharmapalas. The upper part of the sloping valley held by a Lhatsen stands for the offering of siddhi to the yakshas. The lower terrace of the plateau is protected by Mentsuen, auguring good and plentiful harvests, while the wealth of the people on the land is indicative of the abundance of food. In front, the meandering of rivers represents voluntary oblations, and the leafy tree of the forests reflects the increase in experience. The rollicking of monkeys serves as consolation to the yogis.

The flutter of wings of birds in the sky offers inspiration to them. Like one rock may have a thousand mouths, so also a religion may have manifold sects, but its reality or the essence is aggregated in the mind. Oh! what a wonderful place it is! The very hearing of its name is enough atonement for one’s sins. The possession of faith will make one blessed. Seeing it, one will be enlightened. Residing in it, one will attain nirvana. There will be contentment and tranquillity. May peace and happiness envelop this place.

Here's the our members favorite photos of "Monasteries in Thimphu". Upload your photo of Tango Monastery!

Going to Tango Monastery? Get answers from our friendly locals

Connect with Worldtour Plan, Bhutan Travel Planner and 3 other members who have already visited Tango Monastery.