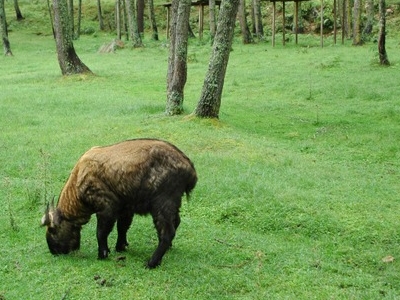 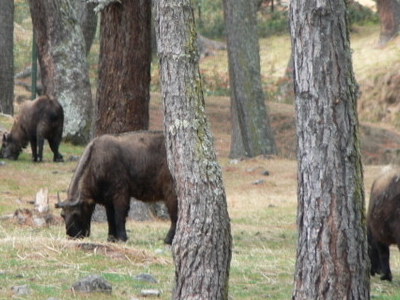 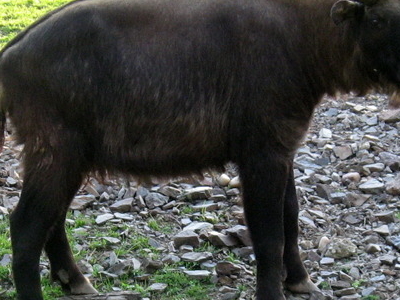 Motithang Takin Preserve, located in the Motithang district of Thimphu, Bhutan is a wildlife reserve area for takin, the National Animal of Bhutan. Originally a mini-zoo, it was converted into a preserve when it was discovered that the animals refrained from inhabiting the surrounding forest even when set free. The reason for declaring takin as a National Animal of Bhutan on 25 November 2005 (Budorcas taxicolor) is attributed to a legend of the animal’s creation in Bhutan in the 15th century by Lama Drukpa Kunley.

The local mythology related to declaring takin as the National Animal of Bhutan is dated to the 15th century. A Tibetan saint by the name Drukpa Kunley, popularly called by the epithet “The Divine Madman” is credited with creating the tamin with unique features. Drukpa Kunley, who was not only a religious preacher but also a proficient tantric, was requested by the people of Bhutan during one of his religious lectures to conjure a miracle before them. The saint agreed to do so provided he was fed for lunch, a whole cow and a whole goat.

Once served, he devoured the food of both animals and left out the bones. He then took out the head of the goat and fixed it to the skeleton of the cow and uttered abracadabra and the magic worked. With a snap, he created a live animal, which had the head of the goat and the body of the cow. The animal sprang up and moved on to the meadows to graze. The animal was then given the name dong gyem tsey (takin). Since then this animal has been a common sight in the hills of Bhutan. Because of this magical creation with high religious connotation, the animal has been adopted as the National Animal of Bhutan.

When a small number of takin were confined in a "mini-zoo" in Thimphu, the King of Bhutan felt that it was improper for a Buddhist country to confine animals for religious and environmental reasons. He therefore ordered the release of the animals and the closure of the mini-zoo. To everyone’s surprise, the takin, known for their docile behavior, refused to leave the immediate area, and strayed in the streets of Thimphu in search of food for weeks.

Given that the animals had become virtually domesticated, it was decided to keep them in an enclosed, forested habitat at the edge of Thimphu and thus the Takin Preserve came to be established in the Motithang neighborhood. An area of 3.4 hectares (8.4 acres) was demarcated and fenced for the preserve. Improvements were implemented in 2004, a collaborative effort of the Royal Government of Bhutan and World Wide Fund, WWF (Bhutan), including a traditionally styled entrance gate, a small information center, signage and trash receptacles.

Small openings in the fencing allow photo opportunities (intended) along unregulated hand-feeding (unintended). As a result, most of the captive animals in the enclosure are obese. The preserve also holds a few sambar and barking deer. The Motithang Takin Reserve has been an integral part of Thimphu city and is an ongoing visitor attraction. NCD plans to expand the collection of the preserve by introducing other rarely seen animals of Bhutan such as the Red Panda, and the Himalayan Serow.

Here's the our members favorite photos of "Wildlife Reserves in Thimphu". Upload your photo of Motithang Takin Preserve!

Going to Motithang Takin Preserve? Get answers from our friendly locals

Get in touch with 1 Touristlink members who want to visit Motithang Takin Preserve or with Worldtour Plan, Tanka Sharma and 1 others who already have been here.