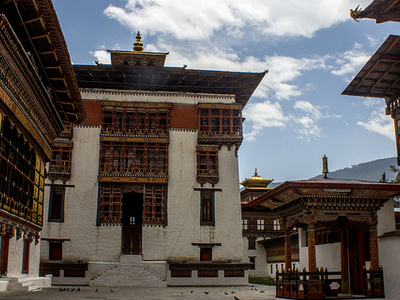 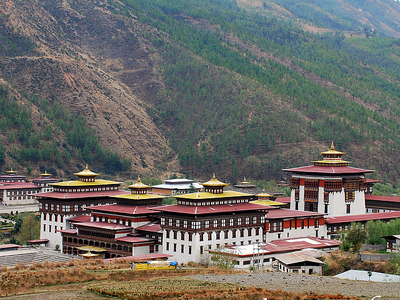 Dechencholing Palace (བདེ་ཆེན་ཆོས་གླིང་, Wylie: bde chen chos gling) is located in Thimphu, the capital of Bhutan, 4 kilometres (2.5 mi) to the north of the Tashichho Dzong and 7 kilometres (4.3 mi) north of the city centre. It was built in 1953 by the third king of Bhutan Druk Gyalpo Jigme Dorji Wangchuk. The palace lies at the northern end of the Thimphu Valley, on the West Bank of the Thimphu River.

The palace is accessed via the Dechhen Lam (road) which runs along the eastern bank of the Thimphu river from the district of Yangchenphug, through Langjupakha for several kilometres before approaching the palace. On the way to the palace the road passes the Royal Banquet Hall, the Centre for Bhutan Studies, the Woodcraft Centre and then passes the Indian Estate on the other side of the river. Just south of the palace on the other side of the river is the suburb of Taba. The palace is surrounded by forest to the east and west; the eastern forest is denser and is said to be the only leafy forest in the city. On a slope in the forest high above Taba is the Wangchuk Resort, used as a meditation retreat.

History
Dechencholing Palace was built in 1953 after the coronation of the third King of Bhutan, Druk Gyalpo Jigme Dorji Wangchuk, following the death of his father, Druk Gyalpo Jigme Wangchuck, in 1952. The third king's son Jigme Singye Wangchuck was born here on 11 November 1955. Later, one hundred thousand Raksha Thotreng rituals were performed at the palace as a beneficial rite for the public enthronement of the Jigme Singye Wangchuck in 1974.

The late Royal Grandmother, Druk Gyalpo’s mother the Dowager Queen Pemadechen (Ashi Kesang Dorji), popularly known as Gayum Phuntsho Choden Wangchuck, lived in this palace as a Buddhist nun. However, the present King does not stay in this palace, as the royal residence is now at the Samteling Palace (Royal Cottage).

Here's the our members favorite photos of "Palaces in Thimphu". Upload your photo of Dechencholing Palace!

Going to Dechencholing Palace? Get answers from our friendly locals

Tanka Sharma is the only Touristlink member to visit Dechencholing Palace. Have you been here? Click here to save it.