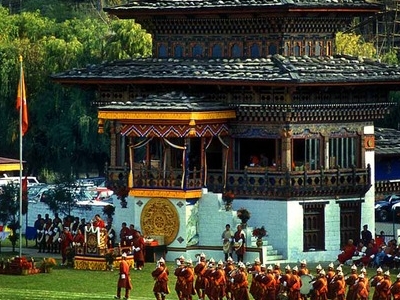 Changlimithang Stadium is a multi-purpose stadium in Thimphu, Bhutan, which serves as the National Stadium. It is predominantly used for football matches and is the home of both the Bhutan national football team and a number of Thimphu-based football clubs who play in both the A-Division and the National League.

In addition to football, the stadium also regularly plays host to major archery tournaments, the national sport of Bhutan. the stadium was initially constructed in 1974 for the coronation of the fourth Druk Gyalpo Jigme Singye Wangchuck, but was completely refurbished in 2007 in advance of the coronation of the fifth Druk Gyalpo Jigme Khesar Namgyel Wangchuck. Floodlighting was added to the football pitch in 2009 and an artificial pitch was laid in 2012 too coincide with the start of the first season of the National League.

Changlimithang is built on the site of a decisive battle in Bhutan's history, fought in 1885, which established the supremacy of Ugyen Wangchuk, his coronation as the first Druk Gyalpo and led to the unification of Bhutan following a series of civil wars and rebellions between 1882 and 1885. Construction for the original stadium was completed in 1974 in time for the coronation of the fourth Druk Gyaplo, Jigme Singye Wangchuk and at that time the whole park covered an area of approximately 11 hectares, with seating for around 10,000 people. As well as taking on the role of national stadium and being the home to the Bhutan national football team and national archery competitions, the stadium also provided facilities for squash, billiards and tennis in addition to being the headquarters of the Bhutan Olympic Committee.

The stadium was completely refurbished and reopened in 2008 for the dual celebration of the coronation of the fourth Druk Gyalpo Jigme Khesar Namgyel Wangchuk and the centenary of the establishment of the House of Wangchuk and the reunification of the country. Redevelopment plans were drawn up by the Ministry of Works and Human Settlement in conjunction with the National Steering Committee for the Coronation Celebrations. the old stand which consisted of 6 rows of seating with a capacity of around 10,000 was completely demolished to be replaced with a stand consisting of twenty one rows of seating for 30,000 people.

This stand would provide substantial seating not just around the area of the football pitch, but also down alongside the archery range. In order to complete this construction, the squash court and basketball court were demolished, although the increased size of the stand allowed for the creation of areas for table tennis and shooting as well as facilities for bathing and changing underneath the seating area.

In addition to changes to the sporting venues within the facility, the Olympic association were provided with new offices, the royal pavilion was expanded to increase guest capacity and the banqueting hall was renovated. Two new parks were also created on the land surrounding the facility: one between the car park and the river and another nearer the archery range were laid out at a cost of Nu 2,000,000. These renovations took two years and cost a total of Nu 230,000,000. The newly refurbished stadium was opened by Heir presumptive Prince Dasho Jigyel Ugyen Wangchuck.

Here's the our members favorite photos of "Stadiums in Thimphu". Upload your photo of Changlimithang Stadium!

Going to Changlimithang Stadium? Get answers from our friendly locals

Connect with Worldtour Plan, Big Tours and 1 other members who have already visited Changlimithang Stadium.