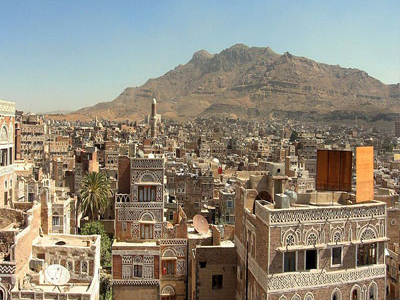 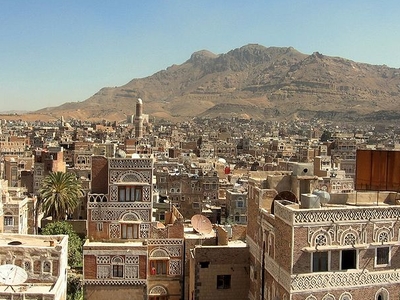 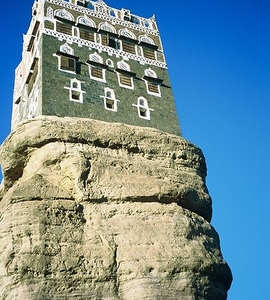 Sana'a also spelled "Sana", is the capital of Yemen and the centre of San‘a’ Governorate; however the city itself is not part of the Governorate, but forms the separate administrative district of "Amanat Al-Asemah". Sana'a is one of the oldest continuously inhabited cities in the World. At an altitude of 2,300 metres (7,500 ft), it is also one of the highest capital cities in the world.

Sana'a has a population of approximately 1,748,000 (2010) making it Yemen's largest city. The old city of Sana'a, a UNESCO World Heritage Site, has a distinctive visual character due its unique architectural characteristics, most notably expressed in its multi-story buildings decorated with geometric patterns.

History
Ancient period
Sana'a is one of the oldest populated places in the world. According to popular legend it was founded by Shem, the son of Noah. It was known as "Azal" in ancient times, referring to Uzal, a son of Qahtan who was a great-grandson of Shem. Its current name likely derived from the South Arabian word for "well-fortified". Arab historian al-Hamdani wrote that Sana'a was walled by the Sabeans under their ruler Sha'r Awtar who also built the Ghumdan Palace in the city.

Climate
Sana'a features the very rare mild version of a desert climate. Sana'a sees on average approximately 200 mm of precipitation per year. However, due to its high elevation, temperatures are much more moderate than many other cities on the Arabian Peninsula. In fact, average temperatures remain relatively constant throughout the year in Sana'a, with its coldest month being January and its warmest month in July.

The city seldom experiences extreme heat or cold. However, some areas around the city can see temperatures fall to around 15 or 20 ºF (−8ºC) during winter. Frost usually occurs in the early winter mornings, and there is a slight wind chill in the city at elevated ares that causes the cold mornings to be oddly bitter, including low humidity.

Culture
Old City
The old fortified city has been inhabited for more than 2,500 years and contains many intact architectural gems. It was declared a World Heritage Site by the United Nations in 1986. Efforts are underway to preserve some of the oldest buildings some of which, such as the Samsarh and the Great Mosque of Sana'a, are more than 1,400 years old.

Surrounded by ancient clay walls which stand 9–14 metres (30–46 ft) high, the old city contains more than 100 mosques, 12 hammams (baths) and 6,500 houses. Many of the houses resemble ancient skyscrapers, reaching several stories high and topped with flat roofs. They are decorated with elaborate friezes and intricately carved frames and stained-glass windows.

Transport
Yemenia, the national airline of Yemen, has its head office in Sana'a. Sana'a International Airport is Yemen's main domestic and international airport. There is currently no rail network but there are plans to install one in the future. A primary means of transport in the city is via dababs, minibuses which carry about 10 people. Taxis are also a very common form of public transport and there are coaches to major cities such as Aden and Taiz.

Here's the our members favorite photos of "Cities in Yemen". Upload your photo of Sana'a!

Going to Sana'a? Get answers from our friendly locals