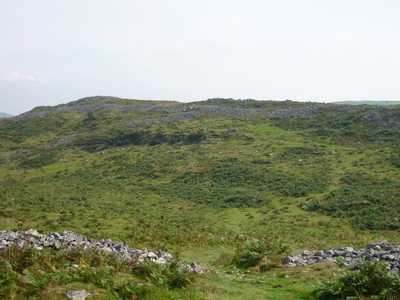 Y Garn Goch,is a hill in the Brecon Beacons National Park in the east of Carmarthenshire, Wales. It lies near the village of Bethlehem, three miles southwest of Llangadog and four miles east of Llandeilo on the southern side of the broad Towy Valley. It is also commonly known as either Garn Goch or Carn Goch. Current landowners are the Brecon Beacons National Park Authority.

Y Garn Goch is formed from the coarse sandstones of the Ffairfach Grit Formation of the early Ordovician period. A northeast-southwest oriented anticline (the Garn Goch Anticline) which runs through Y Garn Goch can be seen to fold these rocks. The sandstones and mudstones of the Abergwili and Llandeilo Flags Formations form the lower slopes of the hill to north and south. A fault runs northeast-southwest through the col between the two tops and is considered a part of the Welsh Borderland Fault System.

Here's the our members favorite photos of "Hills in Swansea". Upload your photo of Y Garn Goch!

Going to Y Garn Goch? Get answers from our friendly locals