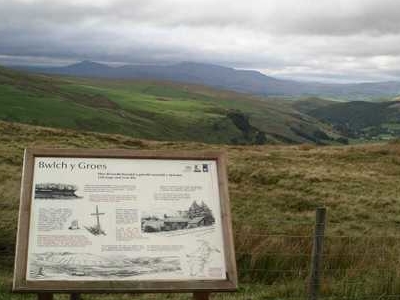 Save me
Been here
Want to go
Show on Map
Here to help 1 tour guides and 1,231 locals

Bwlch y Groes (Pass of the Cross) is one of the highest public road mountain pass in Wales, with a summit altitude of 545 metres (1,788 feet). It lies on minor roads linking Dinas Mawddwy (via Llanymawddwy), Llanuwchllyn and Lake Vyrnwy. The cross, just below the summit at the junction of the roads from Vyrnwy and from Dinas Mawddwy, commemorates the place of the pass on a pilgrim route from north Wales. The view from the pass encompasses the plain of the Dyfi valley, Cadair Idris and a close view of Aran Fawddwy.

Bwlch y Groes is also known as the Hellfire Pass, and was used between and after the wars by the Austin Motor Company and the Standard Triumph Motor Company to test prototype cars and their performance during Hillclimbing. The southern ascent of the Bwlch y Groes, which is approximately 1.7 miles long with severe gradients throughout (steepest 1 in 4), was renowned throughout the 1970s and 80s as the most challenging climb used in the Milk Race round-Britain cycle race.

Here's the our members favorite photos of "Mountain Passes in Aberporth". Upload your photo of Bwlch y Groes!

Going to Bwlch y Groes? Get answers from our friendly locals