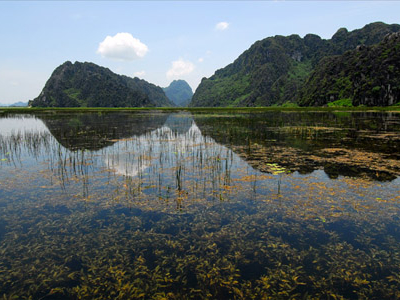 Save me
Been here
Want to go
Show on Map
Here to help 394 tour guides, 277 locals and 1 ambassador

The Red River Delta (Vietnamese: Đồng Bằng Sông Hồng) is the flat plain formed by the Red River and its distributaries joining in the Thái Binh River in northern Vietnam. The delta measuring some 15,000 square km is well protected by a network of dikes. It is an agriculturally rich area and densely populated. Most of the land is devoted to rice cultivation. Eight provinces together with two municipalities, the capital Hà Nội and the port Hải Phòng form the delta. It has a population of almost 19 million.

The Red Rivehdsc r Delta is the cradle of the Vietnamese nation. Water puppetry originated in the rice paddies here. The region was bombed during the Vietnam War. Quảng Ninh Province is sometimes included as a province of the Red River Delta. Alternatively, it is seen as part of the Northeast region. Hà Tây Province was merged into Hanoi in 2008.

Here's the our members favorite photos of "States/Regions in Vietnam". Upload your photo of Red River Delta!

Going to Red River Delta? Get answers from our friendly locals