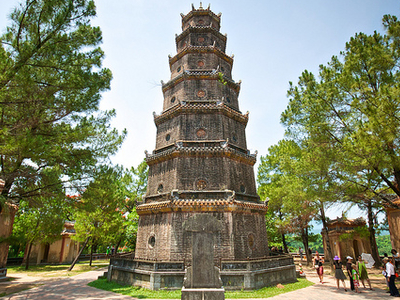 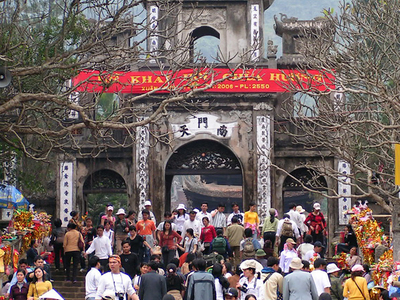 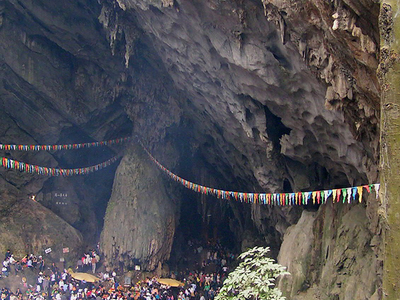 The Huong Pagoda is a vast complex of Buddhist temples and shrines built into the limestone Huong Tich mountains. It is the site of a religious festival which draws large numbers of pilgrims from across Vietnam. The centre of the Huong Temple lies in Huong Son Commune, Mỹ Đức District, former Hà Tây Province (now Hanoi). The centre of this complex is the Perfume Temple, also known as Chua Trong (Inner Temple), located in Huong Tich Cave.

It is thought that the first temple was a small structure on the current site of Thien Tru which existed during the reign of Lê Thánh Tông in the 15th century. Legend claims that the site was discovered over 2000 years ago by a monk meditating in the area, who named the site after a Tibetan mountain where Lord Buddha practiced asceticism. A stele at the current temple dates the building of a terrace, stone steps and Kim Dung shrine to 1686, during the reign of Le Hy Tong, at around the same time that Chua Trong was being constructed.

Over the years some of the structures were damaged and replaced. The original statues of Lord Buddha and Quan Am were cast from bronze in 1767 and replaced with the current statues in 1793. More recently, damage was done during both the French and the American wars. Both the gate and the bell tower at Thien Tru Pagoda were destroyed, the bell tower rebuilt in 1986 and the gate completed in 1994.

Physical layout:
The many Pagodas that make up Chua Huong are spread out among the limestone hills and tropical forests in the area of Huong Mountain.
Den Trinh
Approaching from the Day River, one will first come across Den Trinh (Presentation shrine), also known as Den Quan Lon (Shrine of High-ranking Mandarin), built to worship one of the generals of a Hung King.This large shrine has a gate with two kneeling elephant statues on each side. Inside the structure is a large ceremonial room.
Thien Tru Pagoda
Beyond Den Trinh is Thien Tru (Heaven Kitchen) Pagoda, also known as Chua Ngoai (Outer Pagoda). Here one will find Vien Cong Bao Stupa, a brick structure where Ch’an Master Vien Quang, who led the reconstruction of the pagoda, is buried.Thien Thuy stupa, a naturally occurring structure that is the result of the erosion of a rocky hill, is also nearby.Thien Tru is also home to a bell tower and Hall of the Triple Gem, both built in the 1980s. Inside the Pagoda there is a large statue of Quan Am Nam Hai.
Giai Oan Pagoda
On the route from Thien Tru to Huong Tich cave is Giai Oan Temple, also called ‘Clearing Unjust Charges’ Pagoda. Here there is a pond called Thien Nhien Thanh Tri (Natural Blue Pond), also called Long Tuyen Well, and Giai Oan stream, with its 9 sources.
Huong Tich Cave
The center of the Chua Huong complex, Huong Tich Cave houses Chua Trong (Inner Temple). The mouth of the cave has the appearance of an open dragon’s mouth with Chinese characters carved in a wall at the mouth of the cave. The characters (Nam thien de nhat dong) are translated as “first grade cave of the South World” and the carving is dated to 1770. The words are attributed by some to the ruler of that time, Thinh Do Vuong Trinh Sam.Inside the cave there are many statues.


Popular practices:
There are many practices associated with Chua Huong and its various temples. Some of these are specifically Buddhist, while others are animist or part of popular religion in Vietnam.
Pilgrimage
Many Vietnamese people visit Chua Huong on religious pilgrimage. The standard greetings from one pilgrim to another are "A Di Da Phat" or "Namo Amitabha Buddha".For the purpose of pilgrimage there are various routes that one might take, but the most popular is to take a boat from Yen wharf, stopping at Trinh shrine to ‘present’ themselves at the ‘registration shrine’.
Festival
The main pilgrimage season at Chua Huong is during the Huong Pagoda festival, when hundreds of thousands of pilgrims make their way to Huong Tich cave and the other temples.The longest lasting festival in Vietnam, it officially begins on February 15 on the lunar calendar, but the peak in visitors lasts from the middle of January to the middle of March.

Here's the our members favorite photos of "Shrines in Huong Son Tourist Area". Upload your photo of Perfume Pagoda!

Going to Perfume Pagoda? Get answers from our friendly locals

Joybee Javier is the only Touristlink member to visit Perfume Pagoda. Have you been here? Click here to save it.

Love shrines? Check these out;

Top Voted Shrines Around the World