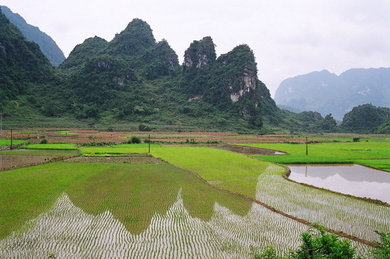 Save me
Been here
Want to go
Show on Map
Here to help 13 tour guides, 5 locals and 1 ambassador

Geographics:
Geographical boundaries to the west of the Northeast is not clear. Mainly due to the lack of consensus among the geography of Vietnam on the boundary between the Northwest and Northeast to the Red River, or should the Hoàng Liên Sơn. The Northeast is limited to the north and east by Vietnam-China border. Southeast overlooking the Gulf of Tonkin. The southern limit by Tam Đảo mountain range and the Red River Delta. It is mountainous and midland with mountainous include massifs, limestone mountains, or mountains.

The western side, is limited by the Red River valley and the Chảy River's source, above, is composed of granite, slate and limestone plateau. In essence, this is the edge of the Yunnan Plateau. The high mountains of the Northeast are concentrated here, as Tây Côn Lĩnh, Kiêu Liêu Ti.

The northern part junction with Vietnam-China border are the plateau (highland) turns from west to east are: Bắc Hà, Quản Bạ, Đồng Văn. Two first plateau has an average elevation of 1000-1200m. Đồng Văn Plateau is 1600m. River and stream flowing through the plateau created a long and deep canyons. There are also some small plain, which is Thất Khê, Lạng Sơn, Lộc Bình, Cao Bằng.

Here's the our members favorite photos of "States/Regions in Vietnam". Upload your photo of Northeast!

Going to Northeast? Get answers from our friendly locals