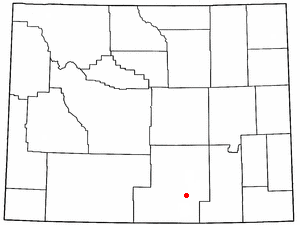 Saratoga is a town in Carbon County, Wyoming, United States. Saratoga is the home of the Steinley Cup microbrew competition, held most Augusts at Veterans Island Park a playground and picnic facility located on a small island in the North Platte River, but this year at Kathy Glode Park a park near the Saratoga airport. There is also a public pool heated by a hot spring located in Saratoga. Saratoga is one of many western communities economically devastated by consolidation, automation and the changing business practices of multinational timber companies. The town's largest private employer, its sawmill, closed in 2003. The town's two largest employers now are the United States Forest Service and Carbon County School District No. 2, both public sector employers. The town's motto is, "Where The Trout Leap In Main Street." The local newspaper is the Saratoga Sun.

Here's the our members favorite photos of "Cities in Carbon County". Upload your photo of Saratoga!

Going to Saratoga? Get answers from our friendly locals