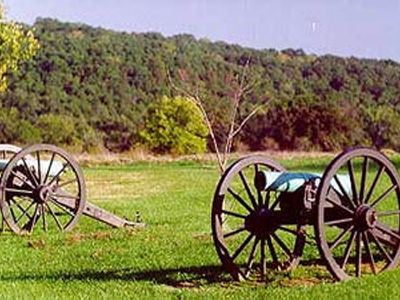 Wilson's Creek National Battlefield at 6424 West Farm Road 182 near Republic, Missouri, preserves the site of the Battle of Wilson's Creek. Fought on August 10, 1861, it was the first major American Civil War engagement west of the Mississippi River. The Confederate's failure to exploit their victory here resulted in keeping Missouri in the Union. Major features include a 5-mile automobile tour loop, the restored 1852 Ray House, and "Bloody Hill," the scene of the major battle. The site is located just southwest of the city of Springfield, in southwestern Missouri.
The battle site was established as Wilson's Creek National Battlefield Park on April 22, 1960, and was redesignated a National Battlefield on December 16, 1970. As with all historic areas administered by the National Park Service, the battlefield was listed on the National Register of Historic Places on October 15, 1966. The visitor center offers brochures about the 4.9 mile self-guided tour of the battlefield, and is the location for special events.The Wilson's Creek Civil War Museum (formerly the General Sweeny Museum), contains artifacts relating to the war west of the Mississippi and exhibits about the war and war life, and is located north of the visitor's center. The 1850s Ray House is a historic house museum that was the site of a temporary field hospital for Southern soldiers after the battle. The house is open on weekends in the summer.

Here's the our members favorite photos of "National Parks in Missouri". Upload your photo of Wilson's Creek National Battlefield!