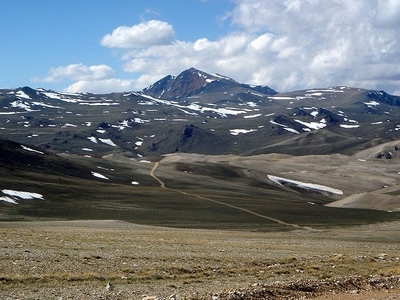 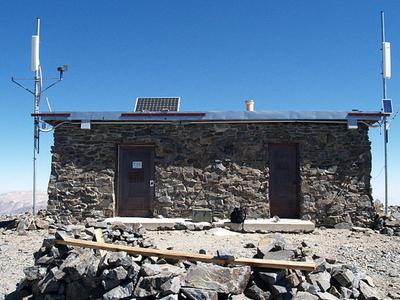 Research Station
The University Of California operates the White Mountain Research Center, comprising three high altitude research stations, on the mountain: Crooked Creek Station at 10,200 feet (3,100 m), Barcroft Station at 12,470 feet (3,800 m), and a small station at the summit. The effects of altitude on animal physiology are studied at all three stations.

Climbing
There is a winding dirt road leading to the summit station that is usually cleared of snow between late June and November. Access is restricted by a locked gate about 2 miles before Barcroft station, but White Mountain Research Station usually opens this locked gate at 11,680 feet (3,560 m) twice each year. Open gate days are the first Sunday in August and Sunday of Labor Day weekend. The normal round trip hike from the gate is about 14 miles (23 km) round trip with less than 2,600 feet (800 m) of vertical gain. However, there are two different dips in the trail of about 250 feet each, adding up to a total elevation gain during the roundtrip of over 3500 feet. The open gate shaves about 4 miles (6 km) and 790 feet (240 m) of gain off the round trip. This route is popular with mountain bikers.

While the peak is arguably California's easiest fourteener via the jeep road, it features more strenuous climbs such as its western ridge, an 8,150-foot (2,500 m) climb out of Owens Valley via a steep ridge from the end of a rough road. The peak is rarely approached from the north where it is guarded by a narrow arête or knife-edge ridge. A better nontechnical alternative to the jeep road would be to drive as far as possible up Leidy Canyon from Fish Lake Valley, then take a graded cattle trail up the broad ridge to Perry Aiken Flat. From the flats it is an easy traverse south into the cirque of the North Fork, North Branch of Perry Aiken Creek. A moderate scramble up the ridge between the North Branch and the larger cirque of the main North Fork leads to the easier upper slopes of the peak. While the peak does not require technical climbing skills, it still poses a serious Challenge to hikers because of the high altitude.

Going to White Mountain Peak? Get answers from our friendly locals

Peaks or Summits near Bishop