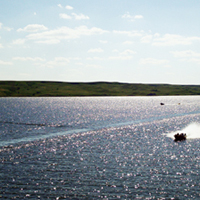 A popular campsite for the Arikara and Mandan people in the past, West Whitlock now draws modern-day campers and fishermen to its shores. When the area became a park, it was named for Mrs. J.F. Whitlock, whose pioneering family once owned the land. Whitlock Crossing was the name given to a small settlement that operated a ferry across the river near the area.

Here's the our members favorite photos of "Recreational Areas in Gettysburg". Upload your photo of West Whitlock Recreation Area!

Going to West Whitlock Recreation Area? Get answers from our friendly locals