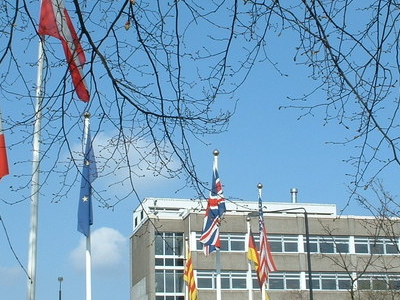 Stafford is a census-designated place in and the county seat of Stafford County in the northern part of the U.S. Commonwealth of Virginia.It lies 10 miles (16 Square Kilometer) north of Fredericksburg, approximately 40 miles (64 Square Kilometer) south of metropolitan Washington, D.C., and about 60 miles (97 Square Kilometer) north of Richmond, the Commonwealth capital. The Marine Corps Base Quantico is located north of the community. U.S. Highway 1, Interstate 95, and Virginia Railway Express commuter trains pass through Stafford. Like the rest of the metropolitan area, including central Maryland, modern Stafford has been shaped by its proximity to the nation's capital. It is largely populated by professionals working in the federal civil service, the U.S. military, or for one of the many private companies which contract to provide services to the federal government.

Here's the our members favorite photos of "Cities in Virginia". Upload your photo of Stafford!

Going to Stafford? Get answers from our friendly locals