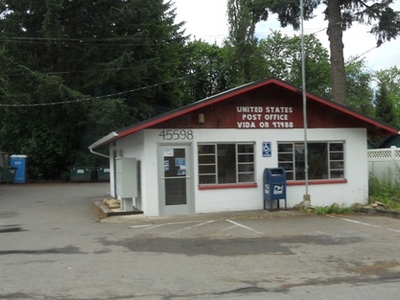 Vida has a population of 867  and is an unincorporated community in Lane County, Oregon, United States. It is located on Oregon Route 126 and the McKenzie River. Vida was originally named "Gate Creek", but this caused confusion with a community of "Gates Creek" in Washington County, so the name of the postmaster's daughter was selected instead. The Vida post office was established on April 12, 1898. The postmaster was Francis A. Pepiot. Vida is home to the historic Goodpasture Bridge, a covered bridge that was added to the National Register of Historic Places in 1979. It is the second-longest covered bridge in Oregon.

Here's the our members favorite photos of "Towns & Villages in Eugene". Upload your photo of Vida!

Going to Vida? Get answers from our friendly locals