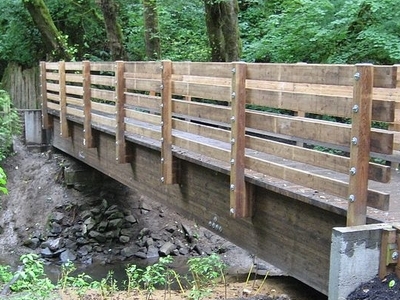 The Tryon Creek State Natural Area is a state park located primarily in Portland, in the U.S. state of Oregon. It is the only Oregon state park within a major metropolitan area. The 645-acre (261 ha) park lies between Boones Ferry Road and Terwilliger Boulevard in southwest Portland in Multnomah County and northern Lake Oswego in Clackamas County and is bisected from north to south by Tryon Creek.

Resources:
The park includes hiking trails, a paved bicycle path, and horse trails. The 3-mile (4.8 km) bicycle path, which runs along Terwilliger Boulevard on the east edge of the park to Lake Oswego, is part of the Portland metropolitan area's system of greenway trails known as the 40 Mile Loop. Near the main entrance off Terwilliger, part of the parking lot is devoted to horse trailers. Riders can choose between the 2-mile (3.2 km) North Horse Loop and the 3-mile (4.8 km) West Horse Loop. Hikers can use the bike path, the horse trails, and 8 miles (13 km) of hiking trails. The paved 0.35-mile (0.56 km) Trillium Trail, a loop furnished with drinking fountains and interpretive signs, can accommodate wheelchairs.

A park building called the Nature Center is near the main park entrance. It has a small play area for toddlers, a gift shop, a large classroom, and a separate area for educational exhibits. Nearby is the Glenn Jackson Shelter, a covered structure for outdoor events.

Vegetation and Wildlife:
Dominant plants in the Tryon Creek watershed are red alder, bigleaf maple, Douglas-fir, Western redcedar, and Western hemlock. The forest understory in the park includes many trilliums, celebrated each spring during the park's Trillium Festival. More than 90 species of wildflower such as fringecup are found in the park as well as plants such as sword fern.

More than 50 species of birds as well as small mammals such as beaver inhabit the park. Tryon Creek is among the few streams in the Portland metropolitan area with a run of steelhead trout, and coho salmon have been recorded spawning in the creek. Water striders, invertebrates that can walk on water, are common in the pools of Tryon Creek.

Here's the our members favorite photos of "State Parks in Portland". Upload your photo of Tryon Creek State Natural Area!

Going to Tryon Creek State Natural Area? Get answers from our friendly locals