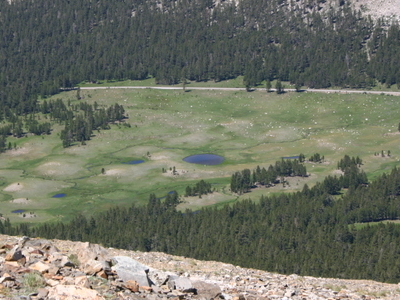 Tioga Pass is a mountain pass in the Sierra Nevada mountains of California. State Route 120 runs through it, and serves as the eastern entry point for Yosemite National Park. It is the highest highway pass in California and in the Sierra Nevada. Mount Dana is to the east of the pass. There are several trailheads into the Yosemite backcountry which begin at Tioga Pass, including the trail to the Gaylor Lakes to the west/northwest, and the rough trail to the summit of Mount Dana. Dana Meadows is immediately south of the pass alongside the highway, as the pass itself is roughly angled north/south as opposed to east/west. Dana Meadows contains several small lakes.

This pass, like many other passes in the Sierra Nevada, has a gradual approach from the west and drops off to the east dramatically, losing more than 3,000 ft (914 m) by the time the road reaches U.S. Route 395.

Here's the our members favorite photos of "Mountain Passes near Sierra Nevada". Upload your photo of Tioga Pass!

Going to Tioga Pass? Get answers from our friendly locals

Get in touch with 1 Touristlink members who want to visit Tioga Pass or with Jim who already have been here.