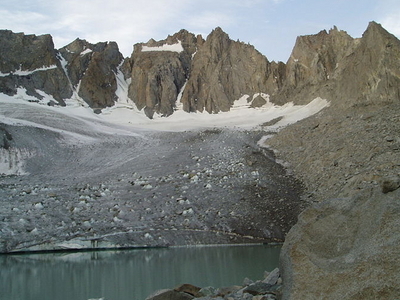 Thunderbolt Peak is a peak in the Palisades group of peaks in the Sierra Nevada in the U.S. state of California. It rises to 14,003 ft (4,268 m) and could be considered the thirteenth highest peak in the state but since the peak has less than 300 feet (91 m) of prominence it is usually considered a subsidiary peak of North Palisade.

The first ascent was attempted by a party of very well known climbers. According to Norman Clyde only two of the group summited. He states that while Jules Eichorn was descending the summit monolith it was struck by lightning, missing Eichorn by a fraction. After a second unsuccessful attempt the remaining members of the party descended from the mountain.

Here's the our members favorite photos of "Peaks or Summits in Big Pine". Upload your photo of Thunderbolt Peak!

Going to Thunderbolt Peak? Get answers from our friendly locals

Peaks or Summits near Big Pine