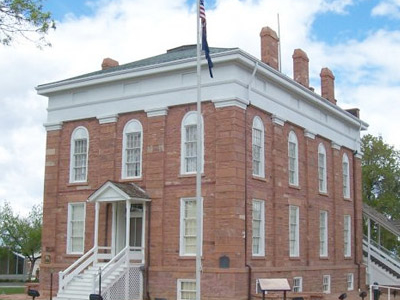 Territorial Statehouse in Fillmore is Utah's oldest existing governmental building. In anticipation of Utah's statehood, early pioneer Brigham Young directed construction of the building as the state's capitol. Only the south wing was ever completed. The existing portion was finished in time for the December 1855 meeting of the Territorial Legislature.
Territorial Statehouse State Park Museum offers a museum store, and auditorium. Also, an All-American Rose Society Garden and picnic area adjoin the museum. Two restored pioneer cabins and an 1867 stone schoolhouse are also located on the grounds. Camping and lodging facilities are located nearby.

Here's the our members favorite photos of "State Parks in Utah". Upload your photo of Territorial Statehouse State Park Museum!