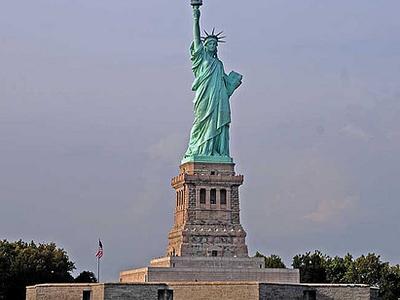 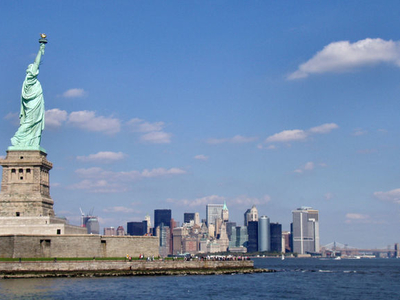 The Statue of Liberty is a colossal neoclassical sculpture on Liberty Island in New York Harbor, designed by Frédéric Bartholdi and dedicated on October 28, 1886. The statue, a gift to the United States from the people of France, is of a robed female figure representing Libertas, the Roman goddess of freedom, who bears a torch and a tabula ansata (a tablet evoking the law) upon which is inscribed the date of the American Declaration of Independence, July 4, 1776.  A broken chain lies at her feet. The statue is an icon of freedom and of the United States: a welcoming signal to immigrants arriving from abroad.

Design And Construction
Origin
The origin of the Statue of Liberty project is sometimes traced to a comment made by French law professor and politician Édouard René de Laboulaye in mid-1865. In after-dinner conversation at his home near Versailles, Laboulaye, an ardent supporter of the Union in the American Civil War, is supposed to have said: "If a monument should rise in the United States, as a memorial to their independence, I should think it only natural if it were built by united effort—a common work of both our nations.

Design, Style, And Symbolism
Bartholdi and Laboulaye considered how best to express the idea of American liberty. In early American history, two female figures were frequently used as cultural symbols of the nation. One, Columbia, was seen as an embodiment of the United States in the manner that Britannia was identified with the United Kingdom and Marianne came to represent France. Columbia had supplanted the earlier figure of an Indian princess, which had come to be regarded as uncivilized and derogatory toward Americans.

Construction In France
On his return to Paris in 1877, Bartholdi concentrated on completing the head, which was exhibited at the 1878 Paris World's Fair. Fundraising continued, with models of the statue put on sale. Tickets to view the construction activity at the Gaget, Gauthier & Co. workshop were also offered. The French government authorized a lottery; among the prizes were valuable silver plate and a terracotta model of the statue.

Dedication
A ceremony of dedication was held on the afternoon of October 28, 1886. President Grover Cleveland, the former New York governor, presided over the event. On the morning of the dedication, a parade was held in New York City; estimates of the number of people who watched it ranged from several hundred thousand to a million. President Cleveland headed the procession, then stood in the reviewing stand to see bands and marchers from across America.

General Stone was the grand marshal of the parade. The route began at Madison Square, once the venue for the arm, and proceeded to Battery Park at the southern tip of Manhattan by way of Fifth Avenue and Broadway, with a slight detour so the parade could pass in front of the World building on Park Row.

Early National Park Service Years (1933–1982)
In 1933, President Franklin Roosevelt ordered the statue transferred to the National Park Service (NPS). In 1937, the NPS gained jurisdiction over the rest of Bedloe's Island.[98] With the Army's departure, the NPS began to transform the island into a park.[108] The Works Progress Administration (WPA) demolished most of the old buildings, regraded and reseeded the eastern end of the island, and built granite steps for a new public entrance to the statue from its rear.

Renovation To Present (since 1982)
The statue was examined in great detail by French and American engineers as part of the planning for its centennial in 1986. In 1982, it was announced that the statue was in need of considerable restoration. Careful study had revealed that the right arm had been improperly attached to the main structure.

It was swaying more and more when strong winds blew and there was a significant risk of structural failure. In addition, the head had been installed 2 feet (0.61 m) off center, and one of the rays was wearing a hole in the right arm when the statue moved in the wind.

Here's the our members favorite photos of "Monuments in New York City". Upload your photo of Statue of Liberty!

Going to Statue of Liberty? Get answers from our friendly locals

Get in touch with 41 Touristlink members who want to visit Statue of Liberty or with Loredana Pantano, Raed Elkabbany and 69 others who already have been here.