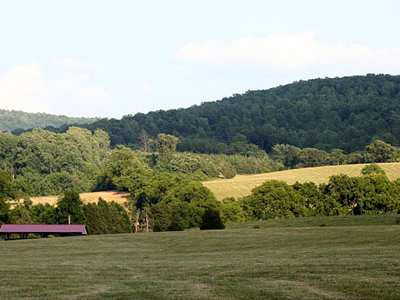 The Southwest Mountains of Virginia are a mountain range centered around Charlottesville, parallel to and geologically associated with the Blue Ridge Mountains, which lie about 30 miles (50 km) to the west. Some of the more prominent peaks include Carters Mountains, Fan Mountain, Brush Mountain, Peters Mountain and Hightop Mountain.

Geology:
The Southwest Mountains are underlain by a belt of Catoctin greenstone, which forms the eastern edge of the Blue Ridge anticlinorium. The Catoctin Greenstone belt extends north into Maryland and also supports the Bull Run and Catoctin Mountains. The basalt flows which were metamorphised to greenstone were deposited during the latest Precambrian age and first uplifted during Grenville Orogeny then again during the Alleghenian Orogeny, in which they were also transported westward to their present location.

Here's the our members favorite photos of "Mountain Ranges in Palmyra". Upload your photo of Southwest Mountains!

Going to Southwest Mountains? Get answers from our friendly locals