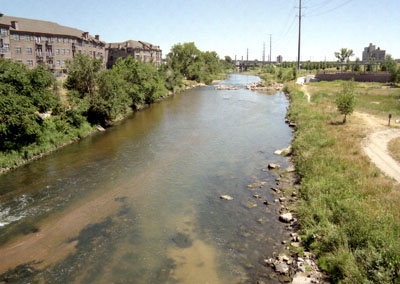 The South Platte River is one of the two principal tributaries of the Platte River and itself a major river of the American Midwest and the American Southwest/Mountain West, located in the U.S. states of Colorado and Nebraska. Its drainage basin includes much of the eastern flank of the Rocky Mountains in Colorado; much of the populated region known as the Colorado Front Range and Eastern Plains; and a portion of southeastern Wyoming in the vicinity of the city of Cheyenne. It joins the North Platte River in western Nebraska to form the Platte, which then flows across Nebraska to the Missouri. The river serves as the principal source of water for eastern Colorado. In its valley along the foothills in Colorado, it has permitted agriculture in an area of the Colorado Piedmont and Great Plains that is otherwise arid.

Here's the our members favorite photos of "Rivers in Nebraska". Upload your photo of South Platte River!

Going to South Platte River? Get answers from our friendly locals