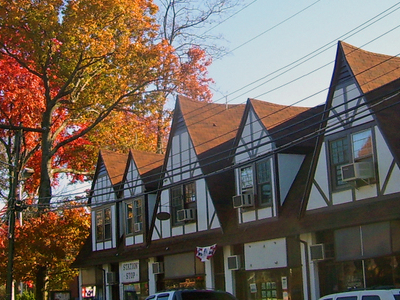 Short Hills began as a planned community, when Stewart Hartshorn (who became wealthy from developing, perfecting and manufacturing the self-acting shade roller) purchased 13 acres (53,000 m2) of land in Millburn Township, near the present Hobart Avenue, Parsonage Hill Road, and Chatham Road. Hartshorn's purpose was to create "a harmonious community for people who appreciated nature," and "where natural beauty would not be destroyed by real estate developments, and where people of congenial tastes could dwell together." He later increased his land holdings to 56 acres (230,000 m2) for himself and 1,552 acres (6.28 km2) for the whole village, with each plot not owned by Hartshorn being no larger than 1/2 acre. Short Hills is an unincorporated area located within the township of Millburn, in Essex County, New Jersey, United States. It is a popular commuter town for residents who work in New York City. This affluent enclave features stately, older homes and newer construction.

Here's the our members favorite photos of "Towns & Villages in New Jersey". Upload your photo of Short Hills!

Going to Short Hills? Get answers from our friendly locals