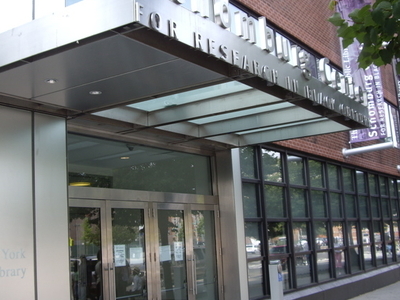 Schomburg Center or The Schomburg Center for Research in Black Culture is a research library of the New York Public Library (NYPL) and an archive repository for information on people of African descent worldwide. Located in the Harlem section of Manhattan, it has, almost from its inception, been an integral part of the Harlem community.

The resources of the Center are broken up into five divisions, the Art and Artifacts Division, the Jean Blackwell Hutson General Research and Reference Division, the Manuscripts, Archives and Rare Books Division, the Moving Image and Recorded Sound Division, and the Photographs and Prints Division. In addition to research services, the center hosts readings, discussions, art exhibitions, and theatrical events. It is open to the general public.

Collection:
The Schomburg Collection was considered, in 1998, as consisting of the rarest, and most useful, Afrocentric artifacts of any public library in the United States. At least as late of 2006, it is viewed as the most prestigious for African American materials in the country. As of 2010, the Collection stood at 10 million objects, The Center contains a signed, first edition of a book of poems by Phillis Wheatley, archival material of Melville J. Herskovits, John Henrik Clarke, Lorraine Hansberry, Malcolm X and Nat King Cole.

The collection includes the files, or papers of the International Labor Defense, the Civil Rights Congress, and the National Negro Congress. It also includes the papers of Lawrence Brown, Ralph Bunche, Léon Damas, William Pickens, Hiram Rhodes Revels, Clarence Cameron White. The files of the South African Dennis Brutus Defense Committee. The collection also includes manuscripts of Alexander Crummell and John Edward Bruce, manuscripts of Slavery, Abolitionism and on the West Indies, and letters and unpublished manuscripts of Langston Hughes.

It includes some papers from Christian Fleetwood, Paul Robeson (restricted), Booker T. Washington, and Schomburg himself. It includes musical recordings, black and jazz periodicals, rare books and pamphlets, and tens of thousands of art objects. The Center's collection includes documents signed by Toussaint Louverture and a rare recording of a speech by Marcus Garvey.

Here's the our members favorite photos of "Libraries near Harlem". Upload your photo of Schomburg Center!

Going to Schomburg Center? Get answers from our friendly locals