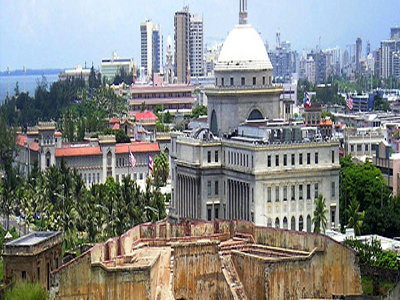 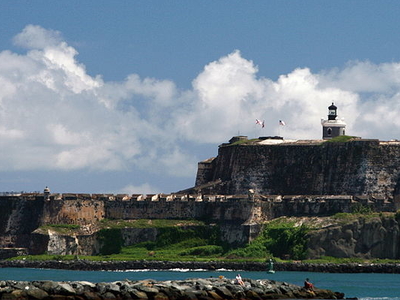 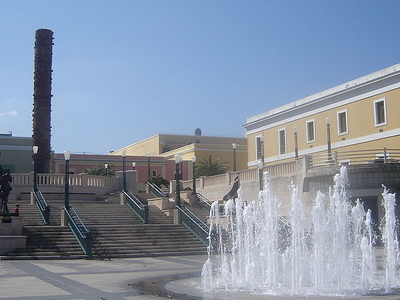 San Juan is the capital and most populous municipality in the Commonwealth of Puerto Rico, an unincorporated territory of the United States. As of the 2010 census, it had a population of 395,326 making it the 46th-largest city under the jurisdiction of the United States. San Juan was founded by Spanish colonists in 1521, who called it Ciudad de Puerto Rico ("Rich Port City"). Puerto Rico's capital is the second oldest European-established capital city in the Americas, after Santo Domingo, in the Dominican Republic. Several historical buildings are located in San Juan; among the most notable are the city's former defensive forts, Fort San Felipe del Morro and Fort San Cristóbal, and La Fortaleza, the oldest executive mansion in continuous use in the Americas.

Today, San Juan is the Puerto Rico's most important seaport, and is the island's manufacturing, financial, cultural, and tourism center. The population of the Metropolitan Statistical Area, including San Juan and the municipalities of Bayamón, Guaynabo, Cataño, Canóvanas, Caguas, Toa Alta, Toa Baja, Carolina and Trujillo Alto, is about 2 million inhabitants; thus, about half the population of Puerto Rico now lives and works in this area. San Juan is also a principal city of the San Juan-Caguas-Fajardo Combined Statistical Area. The city has been the host of events within the sports community, including the 1979 Pan American Games, 1966 Central American and Caribbean Games, events of the 2006, 2009 and 2013 World Baseball Classics, the Caribbean Series and the Special Olympics and MLB San Juan Series in 2010.

Tourism:
Technological advances after World War II in the development of the airliner, coupled with the island's climate and natural setting, have transformed San Juan into the springboard for tourism around the island, and has made the rest of the Caribbean known throughout the world during the last fifty years. Today the capital features hotels, museums, historical buildings, restaurants, beaches and shopping centers. In San Juan there are tourist attractions, including: Old San Juan, Ocean Park, Isla Verde and Condado.

Places and monuments emphasized in tourism campaigns include: Old San Juan, promoting the historic nature of its colonial buildings and narrow streets covered by adoquine, a blue stone cast from furnace slag; they were brought over as ballast on Spanish ships. This includes the city's ancient defensive wall and forts, most notably El Morro and the Castle of San Cristóbal. On January 23, 1984 both of these edifices were catalogued as being part of humanity's cultural patrimony. The restaurants and art galleries in the zone are visited by tourists. The local universities are promoted as historic places, most notably the campus of University of Puerto Rico located in Río Piedras, which is the oldest university on the island being founded in 1903.

Here's the our members favorite photos of "Cities near Puerto Rico". Upload your photo of San Juan!

Going to San Juan? Get answers from our friendly locals