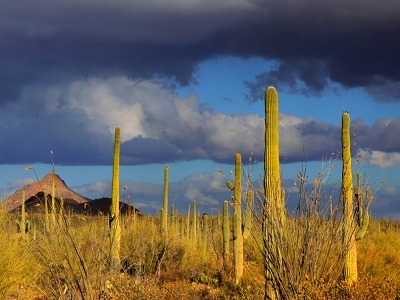 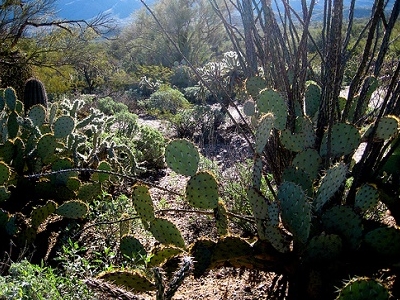 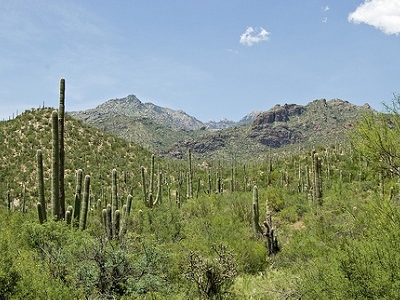 Saguaro National Park, located in southern Arizona, is part of the United States National Park System. The park is divided into two sections, called districts, lying approximately 20 miles (32 km) east and 15 miles (24 km) west of the center of the city of Tucson, Arizona. The total area in 2011 was 91,442 acres (37,005 ha) of which 70,905 acres (28,694 ha) is designated wilderness. There is a visitor center in each of the two districts. Both are easily reached by car from Tucson, but there is no public transport into the park. Both districts conserve fine tracts of the Sonoran Desert, including ranges of significant hills, the Tucson Mountains in the west and the Rincon Mountains in the east.

The park gets its name from the saguaro, a large cactus which is native to the region. Many other kinds of cactus, including barrel, cholla, and prickly pear, are abundant in the park. One endangered animal, the Lesser Long-nosed Bat, lives in the park part of the year during its migration, together with one threatened species, the Mexican Spotted Owl.

Here's the our members favorite photos of "National Parks in Arizona". Upload your photo of Saguaro National Park!

Going to Saguaro National Park? Get answers from our friendly locals