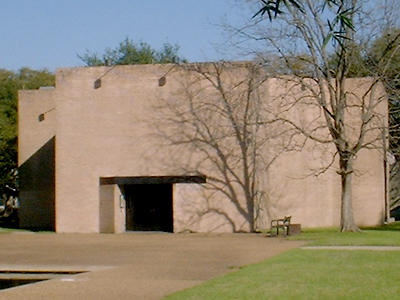 The Rothko Chapel is a non-denominational chapel in Houston, Texas founded by John and Dominique de Menil. The interior serves not only as a chapel, but also as a major work of modern art. On its walls are fourteen black but color hued paintings by Mark Rothko. The shape of the building, an octagon inscribed in a Greek cross, and the design of the chapel was largely influenced by the artist.

Susan J. Barnes states "The Rothko Chapel...became the World's first broadly ecumenical Center, a holy place open to all religions and belonging to none. It became a center for international cultural, religious, and philosophical exchanges, for colloquia and performances. And it became a place of private prayer for individuals of all faiths"

Here's the our members favorite photos of "Churches in Houston". Upload your photo of Rothko Chapel!

Going to Rothko Chapel? Get answers from our friendly locals

Get in touch with 1 Touristlink members who want to visit Rothko Chapel or with Tanja Zivkov who already have been here.