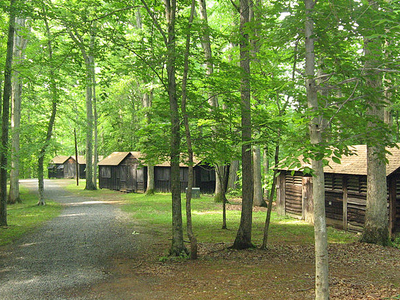 Prince William Forest Park was established as Chopawamsic Recreational Demonstration Area in 1936 and is located in southeastern Prince William County, Virginia, adjacent to the Marine Corps Base Quantico. The park is the largest protected natural area in the Washington, D.C. metropolitan region at over 19,000 acres (7,700 ha). Today, the park is a window into the past and serves as an example of what much of the East Coast once looked like centuries ago. The park serves as the largest example of Eastern Piedmont forest in the National Park System (arguably, one of the most heavily altered ecosystems in North America). The park also protects the Quantico Creek watershed. It is a sanctuary for numerous native plant and animal species.
Tortoise such as the eastern box turtle can be found in Prince William Forest Park, especially after a light rain. True toads can also be spotted in the park, with best luck for seeing them is in the early morning hours of early afternoon along wooded trails near areas that have an insect population. The park is also home to red tail foxes and white tail deer; spotted along the upper North Valley Trail. A few black rat snakes have been seen in and around logs and brush areas. Various skinks can be seen around sunny areas of the trails. Hawks inhabit the park and have been spotted hunting along the creeks.

Here's the our members favorite photos of "National Parks in Virginia". Upload your photo of Prince William Forest Park!

Going to Prince William Forest Park? Get answers from our friendly locals