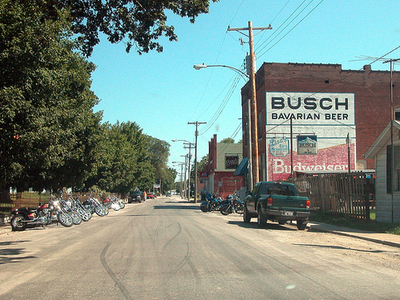 Prairie du Rocher ("Rock Prairie" in French) is a village in Randolph County, Illinois, United States. Founded in the French colonial period in the American Midwest, the community is located near bluffs that flank the east side of the Mississippi River along the floodplain often called the "American Bottom". Prairie du Rocher is one of the oldest communities founded as a French settlement that survives in the 21st century. About four miles to the west, closer to the Mississippi River, is Fort de Chartres, site of a French military fortification and colonial headquarters established in 1720. Some buildings were reconstructed after falling into ruins, and the complex is now a state park and historical site. The fort and town were a center of government and commerce at the time when France claimed a vast territory in North America, New France or La Louisiane, which stretched from present-day Louisiana and the Illinois Country to Canada.

Here's the our members favorite photos of "Towns & Villages in Chester". Upload your photo of Prairie du Rocher!

Going to Prairie du Rocher? Get answers from our friendly locals