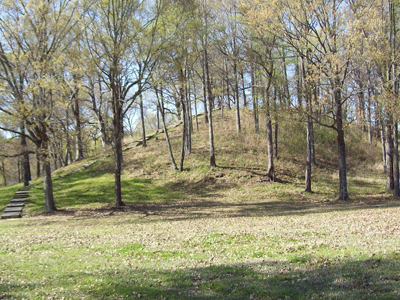 Poverty Point is a prehistoric earthworks of the Poverty Point culture, now a historic monument located in the Southern United States. It is 15.5 miles (24.9 km) from the current Mississippi River, and situated on the edge of Maçon Ridge, near the village of Epps in West Carroll Parish, Louisiana.
The 910-acre (1.42 sq mi; 3.68 km2) site, which has been described as "the largest and most complex Late Archaic earthwork occupation and ceremonial site yet found in North America" is a registered National Monument. The monument was brought to the attention of archaeologists in the early 20th century, when it was given the name of Poverty Point after a nearby plantation. Since then, various excavations have taken place at the site. Scholars have advanced various theories regarding the purpose of the mound site, including religious and ceremonial. Other writers have proposed pseudo-archaeological and the New Age associations. The complex attracts Many tourists as a destination.
Today Poverty Point National Monument is open for visitors daily from 9 a.m. to 5 p.m. except for Thanksgiving, Christmas, and New Year’s Day. The cost of the entrance is $4 a person; people over the age of 62 and children 12 and under are free.As the site is managed by the Louisiana State Parks System, it does not accept a National Parks pass for admission. The site is occasionally monitored by the National Historic Landmark program, which is concerned about the erosion of the mounds. Louisiana is working with the Vicksburg U.S. Army Corps of Engineers division in developing plans for erosion control.

Here's the our members favorite photos of "National Parks in Louisiana". Upload your photo of Poverty Point National Monument!