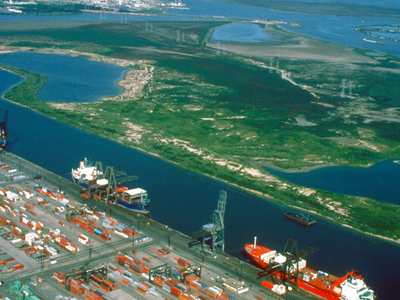 The Port of Houston is a port in Houston — the fourth-largest port in the United States. The Port is a 25-mile-long complex of diversified public and private facilities located a few hours' sailing time from the Gulf of Mexico. It is the busiest port in the United States in terms of foreign tonnage, second-busiest in the United States in terms of overall tonnage, and thirteenth-busiest in the World. Though originally the port's terminals were primarily within the Houston city limits, the port has expanded to such a degree that today it has facilities in multiple communities in the surrounding area. In particular the port's busiest terminal, the Barbours Cut Terminal, is located in Morgan's Point.

The Port of Houston is a cooperative entity consisting of both the port authority, which operates the major terminals along the Houston Ship Channel, and more than 150 private companies situated along Buffalo Bayou and Galveston Bay. Many petroleum corporations have built refineries along the channel where they are partially protected from the threat of major storms in the Gulf of Mexico. The petrochemical complex associated with the Port of Houston is one of the largest in the world.

The port today:
Approximately 215 million tons of cargo moved through the Port in 2005, about half of which was containerized cargo. The Port has two separate terminals dedicated to the handling of cargo containers: Barbours Cut (at Morgan's Point), and Bayport (in Pasadena, opened in October 2006). The Barbours Cut terminal was, in fact, the port's first terminal specifically designed for these shipments. Additional general cargo terminals include Turning Basin, Jacintoport, Woodhouse, and Care. The Port offers a 90-minute free cruise aboard the M/V Sam Houston, details of which can be found on its website. Since the Houston Ship Channel is closed to recreational traffic, this is the only means by which the general public can view port operations, and thus the tours are highly popular.

Most Volkswagen (and Audi) automobiles sold in North America pass through the port of Houston. The Port is operated by the Port of Houston Authority, an independent political subdivision of the State of Texas. The Authority is governed by a seven-member Commission. The City of Houston and the Harris County Commissioners Court each appoint two commissioners; these two governmental entities also jointly appoint the chairman of the Port Commission. The Harris County Mayors and Councils Association and the City of Pasadena each appoint one commissioner. Daily operations are overseen by an Executive Director who serves at the will of the Commission.

A renovation project for the Port's Turning Basin Terminal began in 2010 and is expected to take 10 years. The Turning Basin Terminal is a multipurpose complex with open wharves and 37 docks that are used for direct discharge and loading of breakbulk, containerized, project or heavy-lift cargoes. The goal of the renovation is to accommodate the increase in the transportation of steel, which increased more than 3.1 million tons in the first nine months of 2011, up from 1.9 million tons over the same period in the previous year.

Here's the our members favorite photos of "Ports and Marinas in Houston". Upload your photo of Port of Houston!

Going to Port of Houston? Get answers from our friendly locals

Ports and Marinas in Texas

Ports and Marinas in United States