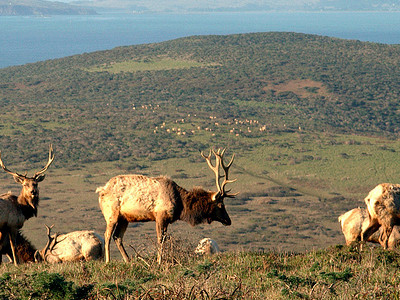 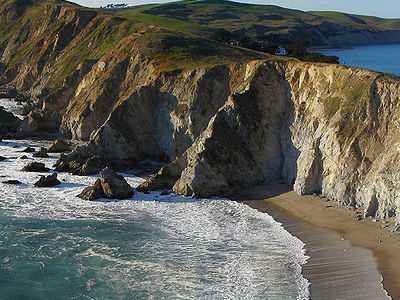 Point Reyes National Seashore is a 71,028-acre (287.44 sq km) park preserve located on the Point Reyes Peninsula in Marin County, California, USA. As a national seashore, it is maintained by the US National Park Service as an important nature preserve. Some existing agricultural uses are allowed to continue within the park. Clem Miller, a US Congressman from Marin County wrote and introduced the bill for the establishment of Point Reyes National Seashore in 1962 to protect the peninsula from development which was proposed at the time for the slopes above Drake's Bay. All of the park's beaches were listed as the cleanest in the state in 2010.

The Point Reyes peninsula is a well defined area, geologically separated from the rest of Marin County and almost all of the continental United States by a rift zone of the San Andreas Fault, about half of which is sunk below sea level and forms Tomales Bay. The fact that the peninsula is on a different tectonic plate than the east shore of Tomales Bay produces a difference in soils and therefore to some extent a noticeable difference in vegetation.

The small town of Point Reyes Station, although not actually located on the peninsula, nevertheless provides most services to it, though some services are also available at Inverness on the west shore of Tomales Bay. The even smaller town of Olema, about 3 miles (4.8 km) south of Point Reyes Station, serves as the Gateway to the Seashore and its visitor center, located on Bear Valley Road.

The peninsula includes wild coastal beaches and headlands, estuaries, and uplands. Although parts of the Seashore are commercially farmed, and parts are under the jurisdiction of other conservation authorities, the National Park Service provides signage and seeks to manage visitor impact on the entire peninsula and virtually all of Tomales Bay. The Seashore also administers the parts of the Golden Gate National Recreation Area, such as the Olema Valley, that are adjacent to the Seashore.

Hiking:
Point Reyes has an excellent system of hiking trails for dayhiking and backpacking. Bear Valley Trail is the most popular hike in the park. Taking off from the visitor's center, it travels mostly streamside through a shaded, fern-laden canyon, breaking out at Divide Meadow before heading gently downward to the coast, where it emerges at the spectacular ocean view at Arch Rock. A portion of Arch Rock collapsed on 21 March 2015, killing one person.

Three trails connecting from the west with the Bear Valley trail head upward toward Mt. Wittenberg, at 1,407 feet (429 m), the highest point in the park.

Across the parking lot at the Visitor's Center is the Earthquake Trail which is a 0.6-mile (0.97 km) loop that runs directly over the San Andreas Fault, deep underground, so that it is possible to stand straddling the fault line. The trail provides descriptions of the fault and the surrounding geology, and there is a fence that was pulled 18 feet (5.5 m) apart during the 1906 San Francisco earthquake.

Here's the our members favorite photos of "Nature Reserves in Marin County". Upload your photo of Point Reyes National Seashore!

Going to Point Reyes National Seashore? Get answers from our friendly locals

Beata Hargitai is the only Touristlink member to visit Point Reyes National Seashore. Have you been here? Click here to save it.