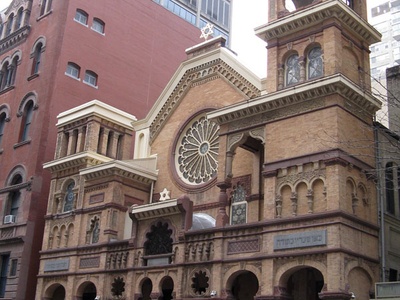 The architects were Schneider and Herter who designed numerous tenements on New York's Lower East Side as well as Hell's Kitchen neighborhoods. The building is similar to other synagogues built at the time which were in the Moorish Revival style that also featured a prominent Rose Window. One of the most remarkable characteristics is the asymmetrical twin towers with the eastern tower being taller (most other synagogues of the period featured twin towers of similar height). The towers are also adorned differently. Each of the towers originally were also topped by a bulbous dome which have since been removed.[2] It is one of fewer than a hundred surviving nineteenth-century American synagogues.

Here's the our members favorite photos of "Synagogues near Manhattan". Upload your photo of Park East Synagogue!

Going to Park East Synagogue? Get answers from our friendly locals