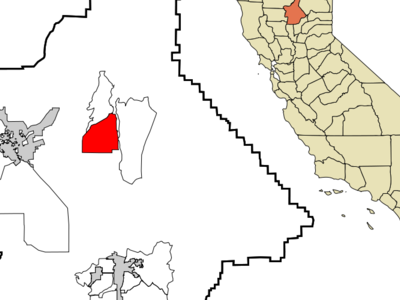 Paradise is an incorporated town in Butte County, in the northwest foothills of California's Central Valley, in the Sierra. The town is considered part of the Chico Metropolitan Area. The population was 26,218 at the 2010 census, down from 26,408 at the 2000 census. Paradise is 10 miles (16 km) east of Chico and 85 miles (137 km) north of Sacramento.

Geography
The town of Paradise is spread out on a wide ridge which rises between deep canyons on either side. These canyons are formed by the west branch of the Feather River to the east, and Butte Creek to the west. The Paradise area extends northwards from Paradise to include the unincorporated town of Magalia and smaller communities such as Stirling City to the far north. Elevations in the town range from around 1500 to 2300 feet (450 to 700 m), steadily increasing as one travels northwards. The town is approximately 8 miles (13 km) east of the city of Chico, and 10 miles (16 km) north of the Oroville area.

History
The first post office was established at Paradise in 1877; it closed for a time in 1911, but was re-established later that year, when the post office at Orloff was closed.[2] Paradise incorporated in 1979. For many years, the Butte County Railroad operated trains along the ridge, serving mines and sawmills.

Health Care
The State of California Office of Statewide Health Planning and Development defines Feather River Hospital as a General Acute Care Hospital in Paradise with Basic emergency care as of August 22, 2006.

Transportation
There are not many options for transportation within Paradise other than driving an automobile. The Paradise/Magalia area is served by the "B line" Butte County Transit. Butte Community College also runs bus service for students. The Paradise Memorial Trail is a paved pedestrian and bicycle path which runs through town on the path of the former railroad tracks leading up the ridge. However, aside from points along this path, the very hilly terrain of the town, coupled with the large spacing of commercial areas and large land area make Paradise difficult to navigate on foot or on a bicycle, in addition to the lack of sidewalks. Truth is, Paradise is so small, you can walk it from top to bottom within a couple of hours.

Trivia
Scenes from Gone With the Wind were filmed in Paradise off of Stark Lane.[citation needed] Paradise was also used in the comic strip "Pickles", by Brian Crane, on June 22, 2011. Eclectic Internet radio station, www.radioparadise.com webcasts from Paradise.

Humboldt and Camp Fires
In June 2008, a wildfire, named the "Humboldt Fire" for its point of origin, swept over 22,800 acres (92 km2) of land between Chico and Paradise. As many as 9300 people were forced to evacuate southwestern Paradise until the fire could be brought under control. Also in July 2008 another fire, the Camp Fire, burned on the northern side of Paradise in the canyon where the Feather River is located. Again, thousands were evacuated from their homes, but the fire failed to cross the river.

Here's the our members favorite photos of "Towns & Villages in California". Upload your photo of Paradise Town!

Going to Paradise Town? Get answers from our friendly locals